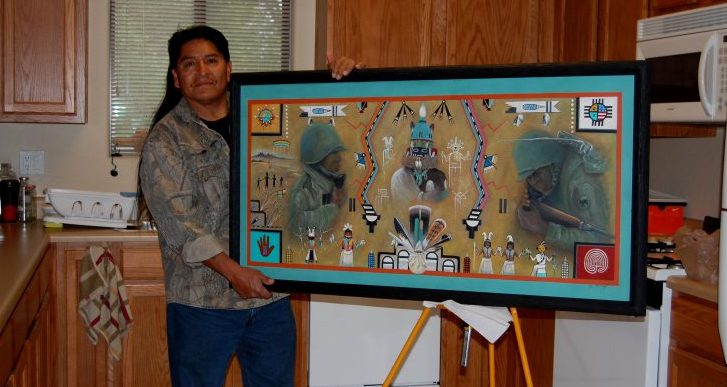 Since he was 17 years old, this Army Veteran and Prescott, Arizona, resident has lived the Hopi proverb that “time isn’t used; it’s experienced.” In 1976, Filmer Kewanyama enlisted in the Army straight out of the Sherman Indian Boarding School in Riverside, California. Fast forward some 40 years later and he is proud of his time as an Army Infantryman. His military career took him from the 11 Bravo Infantry for 21 years of service to teaching others as a senior military instructor of ROTC in northern California at the University of California – Davis.

He admits that it may seem strange to have the Hopi heritage of peace guiding him and his call to serve in harm’s way. But Kewanyama says, “I never once regretted it.” He attributes his positive experience to the many Vietnam Veterans who came before him and who served as his mentors.

Although he enlisted in the Army as a way to support his family, it became his path to a life well-traveled, often taking him on a parallel journey of the Hopi people. Kewanyama explains that as he grew up within the tribe, he began to help his parents with art. Carving, painting, basketry – all become part of his life’s journey. Guided by both the rains and sun, Kewanyama says that as he moved from soldier to Veteran, he received good support from VA, including the vocational rehabilitation program, which helped him align his new calling and took him from teacher to student.

In 2010, Kewanyama earned an associate’s degree in applied science. His specialty was graphic design. He also returned to Hopi land and the Prescott area. There he discovered how much he loved to do artwork. This time he also decided to give back. He became an advocate for Veterans issues. Even today you can find him at the Prescott VA Medical Center helping out other members of tribes as they navigate the VA health care system.

Now a retired father of five grown children and a grandfather, Kewanyama combines his soldier-teacher-student experience. He explains that art “is about healing yourself to be part of society.” Today, he is an award-winning artist in his own right. He says that the process of creating art is a healing process. “Art helps me become more spiritual,” he says. And he encourages Veterans to be part of some form of art therapy.

As an infantryman, he feels that he “was one of the fortunate ones.” At the time, he says, “I was loving what I did.” Today, his life’s work is more about exploring the achievements of the Hopi people. In his latest work of art – Homage to the Hopi Code Talkers – he creates a painting that teaches about the code talkers of all tribes. There were several tribes involved in the code talking program in World War I and 14 tribes in World War II. Kewanyama had always known about the Hopi Code Talkers. However, he believes that nationally, little is widely known about this rare group of warriors. He was inspired by the Hopi’s last code talker with whom he met and talked at the local VA. “I was so touched by him that I needed to do this painting.”

“It is such an honor because I get to share the story of the Hopi Code Talkers.”

After over a year of starting and stopping, perfecting and priming, Kewanyama entered his painting in the local 2017 National Veterans Creative Arts Festival competition. Kenwanyama was recently notified that out of 1,600 entries, his work was selected for first place. With the selection, he and his painting will travel to the national festival in Buffalo, New York, this October.

What began as an artistic journey in 2007 when a VA art therapist introduced him to this program in Prescott has taken him from “Best of Show” to “People’s Choice” to national top-prize winner. With the humblest of character, Kewanyama says, “It is such an honor because I get to share the story of the Hopi Code Talkers.”

In the painting, there is rich symbolism about the Hopi’s process of growth. These men relied upon their faith and way of life to sustain them. Kewanyama relates to this and says, “I always carried cornmeal, bear root, red paint. These things were a form of medicine to help keep me safe, wherever I went. These men who are in my painting also had to be faithful and rely on ceremonies like I did.”

Finally, the painting brings full circle a long line of military experience of the Hopi people who have responded to their country’s call even though they are a people of peace, serving all Americans, not just the Hopi people. The American flag and Hopi symbol merge in Kewanyama’s winning piece to show that they — and he — belong to both.

VA medical facilities use the creative arts as one form of rehabilitative treatment to help Veterans recover from and cope with physical and emotional disabilities. Across the country each year, Veterans enrolled at VA health care facilities compete in a local creative arts competition. The competition includes 51 categories in the visual arts division this year that range from oil painting to leatherwork to paint-by-number kits. In addition, there are 100 categories in the performing arts pertaining to all aspects of music, dance, drama and creative writing. Through a national judging process, first, second and third place entries in each category are determined.

The festival is presented by VA and the American Legion Auxiliary.

The National Veterans Creative Arts Festival is the celebration and grand finale stage and art show, which are the culmination of talent competitions in art, creative writing, dance, drama and music for Veterans treated at VA. This year’s national festival will be hosted by the VA Western New York Healthcare System in Buffalo, New York with events for the public on Sunday, Oct. 29, 2017.

Stacie M. Rivera is a public affairs specialist with the Veterans Health Administation’s Office of Informatics and Information Governance.