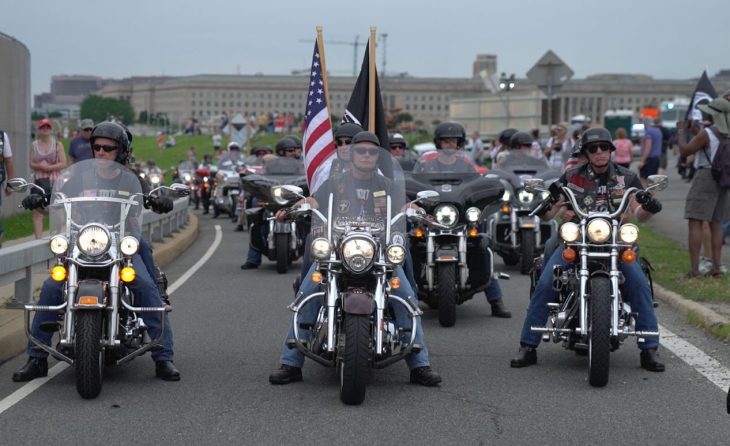 On Sunday morning in the north parking lot of the Pentagon, a sea of motorcycles and people gathered for the 30th running of Rolling Thunder – a tradition that started in 1987 with about 2,500 participants. This year, the event drew close to a million people, including the riders and the supporters lining the streets to cheer them on.

Tillerson and Shulkin joined thousands of fellow riders at the Pentagon.

Participants are primarily Veterans or motorcycle riders, but neither are a requirement to be part of the event, because Rolling Thunder isn’t a motorcycle rally; its a demonstration. The purpose behind Rolling Thunder is to remind the government their responsibility for prisoners of war and those still missing in action. The demonstration demands accountability until each person comes home.

The event originally got its name from the 1965 bombing campaign in North Vietnam, “Operation Rolling Thunder.” Now, its even more fitting as anyone in a five mile radius of the riders can hear the Harleys pouring into Washington.

“There’s nothing like this,” Shulkin said. “Its fantastic. What an honor to be here to be able to give our appreciation and remember those that have served in our great country.” After visiting with Veterans at the Pentagon, he helped lead the way to the National Mall on his own motorcycle. “I’m riding. Couldn’t keep me off my Harley.”

While the original intent of Rolling Thunder lives on, it has become much more. It symbolizes patriotism, remembrance, and honor for all service members. Riders wear the name’s of fallen comrades on their vests, and patches are dedicated to their service. Each rider was there to support the cause of Rolling Thunder, but each rode with their own story of sacrifice and honor.

Bikers and supporters stage at the Pentagon north parking lot in preparation for the 30th running of Rolling Thunder.