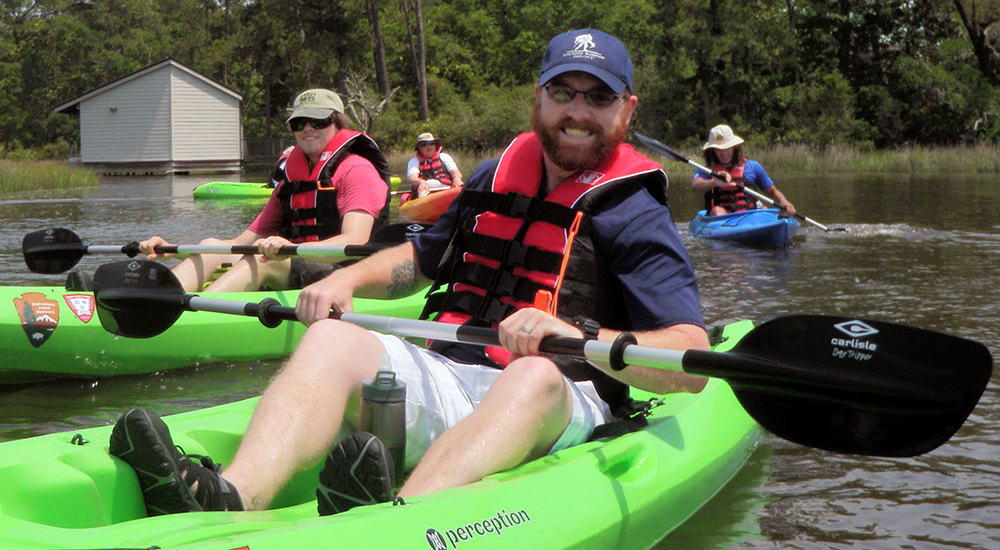 Air Force Veteran Christopher Bramblett has an appreciation for national parks and public lands that goes back to his youth. Members of his family were large National Park and public land supporters so he grew up hiking, camping, and spending time in the outdoors.  Bramblett, resident of Ocean Springs, Mississippi, said his mom was also a seasonal park ranger and a Veteran (Air Force), as was his grandfather (WWII, Army), so in keeping with family tradition, he joined the armed forces.

Bramblett served 10 years in the Air Force. Using the GI bill, he started working toward his degree in U.S. history.  The transition from military to civilian life wasn’t as smooth as he had hoped and soon Bramblett found himself in, as he describes it, a dark place.

“It’s hard to describe my mental state at that time,” Bramblett said.  “I was depressed, unemployed, and not sure what to do with myself.  But I knew I had to do something.”

Bramblett was living in Charleston, South Carolina, at the time so he decided to reach out to the staff at Fort Sumter National Monument and see if they had some volunteer work he could do.  They did and that began his circle back to well-being.

Mountains are calling and I must go

“I always think about the author and environmentalist John Muir and his famous quote – ‘The mountains are calling and I must go.’ That rings so true for me.  I can go out in the woods and be the only person around.  It’s a spiritual thing for me.  Our forefathers had the brilliance to protect the beauty of our public lands but they also created an escape for us, away from the hassles of everyday life.  There is so much healing that goes on when you are alone surrounded by nature,” he said.

By now, some of Bramblett’s co-workers were encouraging him to apply for an internship with the National Park Service, which he did. Between the experiences he received in the internship and volunteering, he began applying for jobs in the Park Service and he eventually landed a position as a Park Ranger in New Mexico at Carlsbad Caverns National Park.  He and his wife later moved to Ocean Springs, Mississippi, when he accepted a position with Gulf Islands National Seashore (NS).

“I love the outdoors and here we have 160 miles of coastline – from here all the way to Destin, Florida, skipping Alabama.  We have hiking, kayaking, campgrounds, john boat tours, tours of old forts, and plenty of places to fish,” Bramblett said.  “Sometimes we need reminding of the healing powers of nature. I know I did.”

“I love the outdoors and here we have 160 miles of coastline.”

As a note, individuals with a life altering disability are eligible to receive an America the Beautiful Access Pass that gives free access to all National Park Service and other public land sites around the country. Active duty military members can also receive a free annual pass.  https://store.usgs.gov/pass/index.html

About the author: Mary Kay Gominger, is a Public Affairs Officer at the Gulf Coast Veterans Health Care System