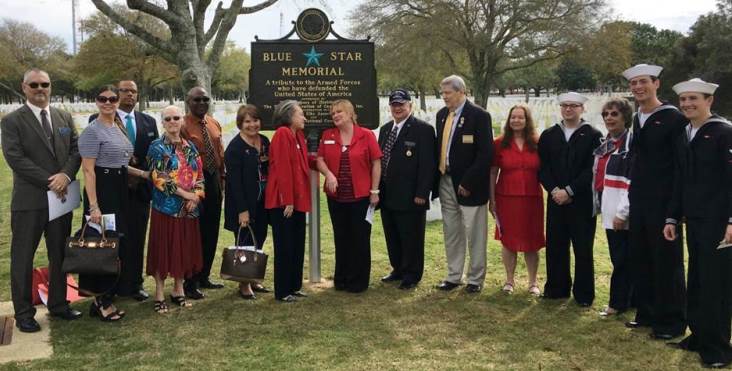 Its history dates back to World War II; its legacy has roots in President Abraham Lincoln’s Gettysburg Address. And the National Garden Clubs, Inc., a non-profit educational organization founded in 1929, serves as its lifeline. The “it” is something that each of us sees along highways and byways, but never really stopped to understand the reason behind the Blue Star signs often surrounded by flowering plants or trees.

With about 175,000 members, including members of the Florida Federation of Garden Clubs’ in 5,000 or so clubs across America, there are miles and miles of Blue Star Memorial markers in America today. The program is a living tribute to the men and women who serve in the Armed Forces. What began as an idea in 1944 in New Jersey, grew in the 1980s into a flowering tribute in public parks, civic and historical grounds. In 1996, this Blue Star designation was extended to the hallowed grounds of the VA’s National Cemetery Administration.

Since the program began over 70 years ago, more than 3,000 Blue Star markers of all three types have been dedicated across the country, including markers in all nine national cemeteries in the state of Florida thanks to members of the Florida Federation of Garden Clubs, in cooperation with the Florida State Elks Association which assisted with funding. From the Florida Keys to the Panhandle and to the state’s capitol, dedication ceremonies for eight of the nine have taken place with the final dedication planned for the fall of this year.

The first Blue Star Memorial marker was dedicated in January 2015 at the Jacksonville National Cemetery, according to Rosita Aristoff, Blue Star chair for the Florida Federation of Garden Clubs. “These Blue Star Memorial Markers continuously pay tribute to the sacrifices made on our behalf by the brave members of our Armed Forces,” she said.

So how does it work?

In the case of the national cemeteries in Florida, usually one or more Florida Federation of Garden Club Districts, consisting of many garden clubs in the counties comprising each district, collaborate on acquiring the markers and maintaining them in perpetuity. Most often a memorial garden of some sort is planted with the Blue Star markers, but in the case of the national cemeteries such a garden and the planting material involved is at the prerogative of the cemetery director. In some instances the location of the marker is not suitable or appropriate for a garden.

After each marker is installed, the club conducts a dedication ceremony inviting the public, including Veterans and Veterans organizations. The basic format of the dedication ceremony is virtually identical to that of the dedication ceremony of the nation’s first national ceremony at Gettysburg where President Lincoln gave his famous address. “As part of the ceremony we give a brief history of the Blue Star markers, a military tribute is made, we have the unveiling, and the marker is dedicated along with the invocation and benediction, the patriotic music, the color guard, and Taps,” according to Aristoff.

Stacie M. Rivera is a public affairs specialist with the Veterans Health Administration’s Office of Informatics and Information Governance.