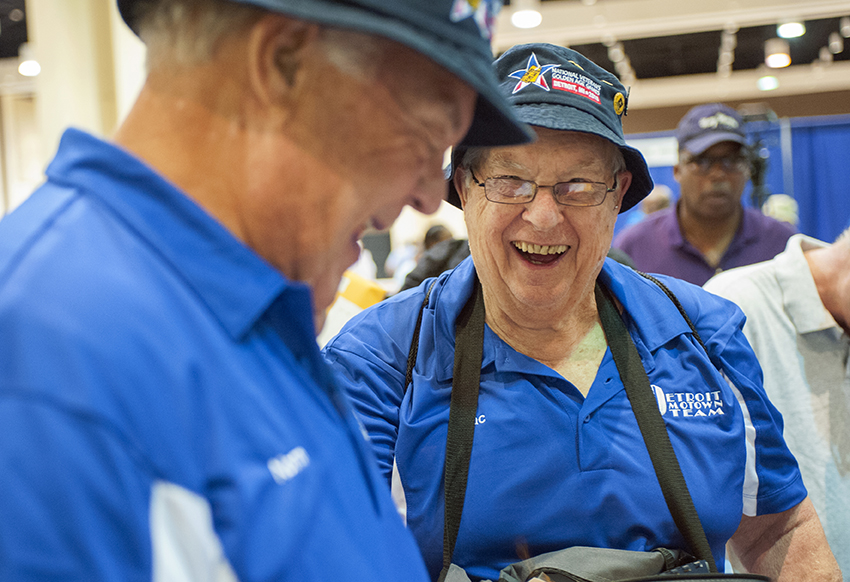 The three of them only get together once every year, but sibling love and rivalry still runs deep after 80-plus years.

“Hey, if I was his dad, he’d be better looking,” says Charles.

The three military Veterans came together to compete in the 2017 National Veterans Golden Age Games in Biloxi, Mississippi. The annual event is open to Veterans 55 and older as they compete in a variety of events such as cycling, track, bowling, swimming, javelin, air rifle and more.

The brothers represent the Motown Team from the John D. Dingell VA Medical Center in Detroit. Jac and Charles have competed the last 12 years. They talked Norm into participating a few years ago.

The three competed in a variety of events in Biloxi, including archery, power walking, horseshoes, boccia, javelin and swimming.

“Swimming is Jac’s big event,” said Charles. “Last year, between me, him and my brother we took 11 medals.”

Swimming comes naturally for Jac, who swims laps each morning at his local YMCA, or, when he’s at his summer cottage, the nearby lake.

“I walk 100 yards out my door and dive right in,” he said. “I swim year round. Look at me and my brothers. Nobody’s sick because we don’t keep a sedentary lifestyle. But we have a philosophy here. If we win a gold medal in an event, we don’t compete in it again. That gives somebody else a chance.”

The Olmstead’s were the only three-of-a-kind family members competing in the Golden Age Games. All three served in different military branches and get care through Veterans Affairs.

Jac was drafted into the Army first in 1953, and was on his way to Korea when he was diverted to Indianapolis. Charles joined the Marine Corps around the same time.

Charles finished training in San Diego when the cease-fire happened in Korea.

From left, Charles, Norm and Jac Olmstead have been competing in the National Veterans Golden Age Games for the last several years. The Michigan brothers served in the Marine Corps, Air Force and Army, respectively.

“I think I was two days out of training when it was settled. We were all happy and thought we’d be going someplace else and they sent us to Korea, anyway,” he said. “We were a mile and a half south of the DMZ and on nothing but high alert the whole time.”

With limited communications, Jac didn’t know where his brother was stationed.

“It was probably six months before I even knew (Charles) was in Korea.”

“You know the difference between the Boy Scouts and the Air Force?” Charles quips. “The Boy Scouts have adult supervision.”

“The truth is, we don’t even bring up our military time until we get together here each year, but it’s all in good fun,” says Norm. “Everybody gets along here, and I think that’s why people like it so much. We have some Veterans who have PTSD, and these games help them, because most people who didn’t serve don’t understand that stuff. But they come here, and people can relate.”

Charles said the annual competition isn’t just about staying healthy and active, but finding inspiration in one another.

“I don’t hear a lot of war stories, but I’ll tell you what. I’ve met an original Tuskegee Airman here. That’s history and someone worth seeing and talking to,” he said. “I watched an older woman walking around the track, pulling an air tank. I met a guy who tried to get into the Olympics but lost out to a guy named Jesse Owens.

“We’re just a bunch of old goats getting out, but each year you meet or see something new,” he said.

One of his fondest memories is when the Golden Age Games took place in Honolulu in 2011.

“I saw the name of a buddy I served with in Korea in the paper,” he said. “I looked up his number and gave him a call. He gave us a tour of the island that tourists don’t normally see, and when I saw him, it was just like yesterday. We picked right up from Korea.”

And, they all added, ‘how many people their age do what they do?’

“When you go home, check in your neighborhood to see how many 80-year-olds are out there throwing a shotput or javelin,” Charles said.

“We might only throw it three or four feet,” Norm said, “but we’re throwing it. This is something we all look forward to each year. It’s good to be with my brothers and good to meet new friends each year.”