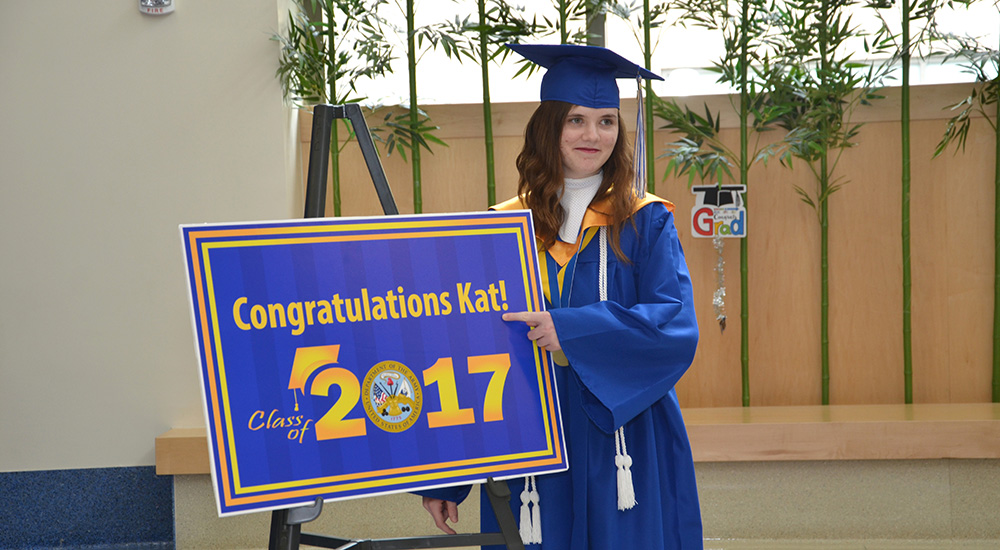 Kaitlin “Kat” Cohn was just like any other young woman on her high school graduation day.  She walked down the hallway in her cap and gown as Pomp and Circumstance played in the background, smiling and playfully sticking her tongue out at friends and family snapping photos of her big day.

There were a few differences, though.  For one, Cohn was the only graduate at this ceremony.  Another difference is it didn’t take place at a high school auditorium or local amphitheater.  Instead, this ceremony took place at the James A. Haley Veterans’ Hospital Polytrauma Unit, where Cohn has been a patient since April.

Cohn was a senior at Pedro Menendez High School in St. Augustine, Fla., and was in the International Baccalaureate program, taking advanced classes that would give her college credit.  Fluent in Spanish and sign language, she also taught herself to play multiple musical instruments.

She had enlisted in the Army National Guard with parental consent in July 2016, was scheduled to attend basic training and was already participating in unit drill weekends and physical training.  Another guard member was driving her to Camp Blanding in northern Florida March 3 for a drill when the vehicle she was in was hit head-on by another, leaving the 17-year-old in a coma and with horrific injuries.

In Coma for 30 Days After Accident

“She had multiple brain bleeds,” said Jennifer Devoe, Cohn’s mother.  “She also had a spinal fracture of lumbar five, she had two orbital fractures and a temporal fracture which gave her optical nerve damage, so her vision is still not quite right.”

The accident also left Cohn unable to use the left side of her body and with a bowel injury.  She spent the first 30 days after the accident in a coma at another medical facility before being transferred to the JAHVH Polytrauma Unit April 3.

Since then, Cohn has made tremendous strides in her recovery, her mother said.

“She went from not being able to communicate at all to communicating,” Devoe said.  “Now she’s able to talk, walk and she’s taking care of herself, you know, her personal needs. And her left side, she’s able to walk and utilize her left hand to a certain degree.  I don’t know how to put it other than, wow!”

Even though she’s made great progress in her recovery, Cohn still wasn’t able to attend her high school graduation ceremony in St. Augustine on May 22.  She had already earned the required credits for graduation with a 3.5 grade point average, and the school dedicated the ceremony to Cohn and streamed it live via the internet to her hospital room, but it wasn’t the same.

Wanted to do something special for her

“We’re a real family at our school so we really didn’t want her to miss out on this,” said Pedro Menendez High School Guidance Counselor Vicki Murphy.  “The principal dedicated graduation to her, and she was the last diploma name we read, but it’s different when you’re watching it from a hospital room so we really wanted to do something special for her.”

Murphy discussed the idea of having a graduation ceremony at the hospital with Cohn’s mother, who then talked with JAHVH Social Worker Aaron Feliu, Kat’s case manager.  Feliu then reached out to Shayna Rodriguez from the hospital’s Public Affairs office, who helped finalize the arrangements.

So it was that on June 3, exactly two months after arriving at JAHVH, Kat Cohn walked down the Polytrauma Unit’s Main Street hallway in her cap and gown to receive her high school diploma from her teacher and guidance counselors.  It was a proud moment for the young graduate, and for her mother as well.

“I’m so proud of her,” Devoe said.  “I’m overjoyed by everything that’s happening here.”

She also expressed her appreciation to those responsible for her daughter’s care.

“The staff, the nurses, the CNAs, the doctors, the coordinators, I mean they’re just so amazing,” Devoe said.  “I don’t know that I would be able to get through this without them.  This facility is amazing.”

More photos of the graduation ceremony are available at the JAHVH Flickr page, https://www.flickr.com/photos/jahvh/albums/.