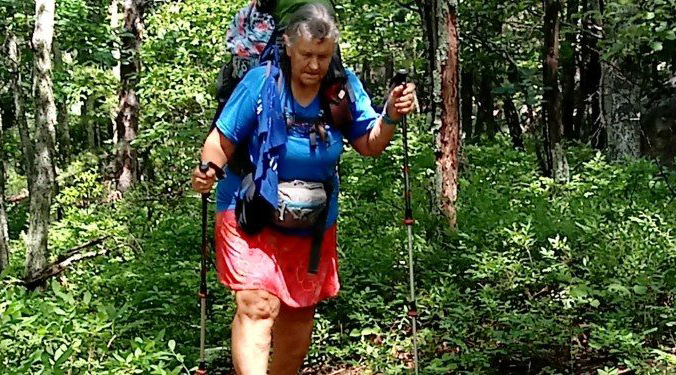 Curtner, who prefers to be called by her trail name, “Mother Goose,” sat down with me June 12 during her visit to the Salem VA Medical Center to talk about her hiking experiences. Since her first Appalachian Trail hike in 1988, she has backpacked more than 45,000 miles, including three hikes on the west coast’s Pacific Crest Trail.

“I hike somewhere every year trying to do 2,000 miles per summer and when I get into a hike, I like the way my body feels.” said the 69-year-old Army Veteran.

“I work with the best team in Florida: Matt Holsbake in orthopedics and his assistants,” Curtner explained. “When I’m traveling on my hikes, my Florida VA coordinator, Ruth Davis offers a valued service as my liaison with out-of-state VA hospitals.”

During her last visit to the Lake City VA, Holsbake advised her she needed to have knee injections every three months for optimal effectiveness.

“I told him I was about to go back on the Appalachian Trail in Georgia and hike north until September’” said Curtner, explaining that should would not be in Florida to get the routine injection, but would be in Virginia Making her way north.

Holsbake told her to keep him abreast of her progress on the trail and he would help arrange for her to get her knee injection at the VA facility closest to her trail location.

“Ms. Price had to go through several administrative steps to have the shot sent to the Salem VA Medical Center. In addition, I received regular updates via phone conversations and text messages from Ms. Price regarding her success in obtaining the needed medication. By the time I arrived to Salem VA Medical Center, we were looking forward to meeting each other,” said Curtner.

“In a time when the VA may receive complaints and negative publicity, I would love Washington to know there are VA teams going over and beyond the call of duty for one appreciative Army Veteran long-distance hiker,” said Curtner.

Does Curtner have plans to continue hiking after this year?  “I have the blood pressure of a 20-year-old and if my knees permit, be back on some trail next year which one I’m not sure, but my goal is to backpack 50,000 miles by the time I’m 80.”

“It feeds my soul and hiking is half my life.” said Curtner.

Brett Robbins is a public affairs officer at the Salem VA Medical Center in Salem, Virginia. He is a U.S. Army Veteran.