VA surgeon-researcher, a Navy Veteran, dedicated to improving the survival outcomes for Veterans with esophageal cancer 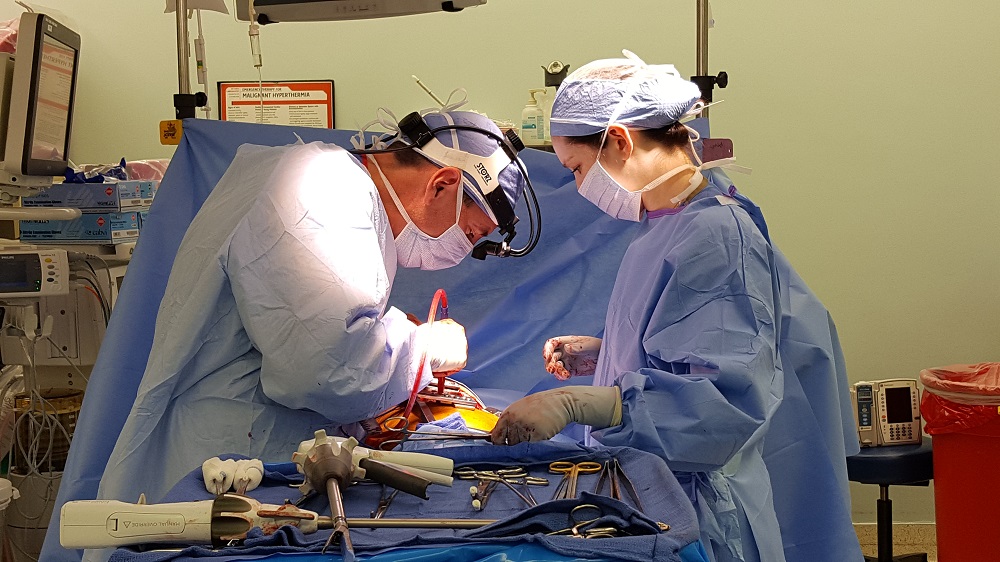 The esophagus, a 10-inch long muscular tube, connects the mouth to the stomach, its sole function to carry foods, liquids, and saliva to the stomach where digestion begins. We eat, drink, and swallow without thinking much about the esophagus until a problem arises, such as difficulty swallowing or food getting stuck.

Esophageal cancer, currently the seventh leading cause of death for men in the U.S., is increasing in frequency, a spike especially dramatic among Veterans. Reports of esophageal cancer among Veterans indicate a 40 percent hike within the VA system from the periods of 1995-1999 to 2000-2005.

Esophageal cancer includes two types: squamous cell carcinoma and adenocarcinoma.  Both types are more common in men than in women.  Squamous cell carcinomas are primarily seen in patients with a history of excessive alcohol use and smoking.  Risk factors for adenocarcinomas, which are now the more common type in this country, include a diet poor in vegetables and fruit, obesity, and acid reflux or GERD.  Some symptoms such as back pain, heart burn, weight loss, a persistent cough, hoarseness, weakness and bleeding tend not to be recognized as esophageal-related issues.

“The fundamental goal of my research effort is to improve the survival outcomes for patients with esophageal cancer,” said Dr. James M. Donahue, a surgeon and researcher at the VA Maryland Health Care System and assistant professor at the University of Maryland School of Medicine.

Donahue has been selected for a VA Merit Review Award to advance his research of esophageal cancer, an award that supports his effort to define the roles and mechanisms of molecules called microRNAs that contribute to cancer growth and chemotherapy resistance. The VA Merit Award for $650,000 over four years—from 2017 to 2020—supports Donahue’s desire to improve the survival rates of patients struggling with esophageal cancer with interventions before and after.

Lost his mother to breast cancer

“Clinician-scientists like Dr. Donahue have a unique perspective on disease, using insights from the patient care they provide to drive questions they can answer in their laboratories,” he added.  “Dr. Donahue’s cutting-edge studies on microRNAs in esophageal cancer fit well within the VA’s research portfolio and ultimately should advance treatments that we can offer Veterans with this disease.”

For Donahue, a Navy Veteran who was deployed with a forward surgical team to Afghanistan in 2013, the inspiration to understand cancer at a cellular

“While I was deployed, daily emails with my research team enabled the research projects to continue.  In addition, the support and guidance that my team received from Dr. Wang and Dr. Jaladanki was invaluable in ensuring that we continued to make scientific progress,” he said.