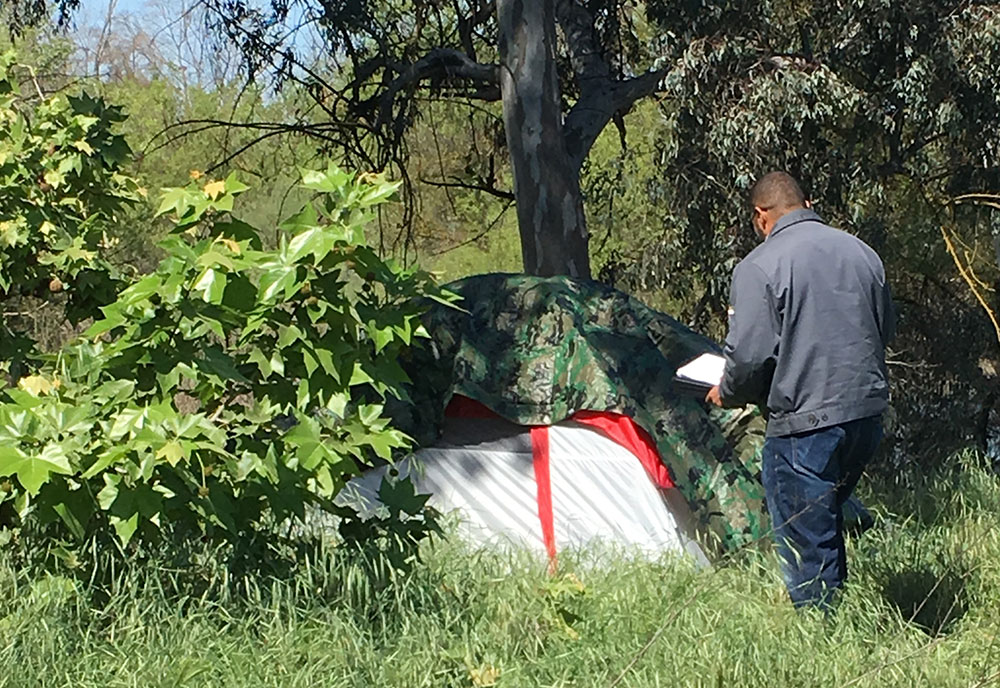 As a concerned citizen, neighbor and someone who really cares, she knew there was a large population of Veterans who, for whatever reason, were not coming into the VA hospital to get tested for Hepatitis C.

As a clinical pharmacist at the VA hospital, she also knew how dangerous the Hep C virus is if left untreated and how curable it is if identified early and treated with the latest and most effective medications.

But what could she do to help? That’s the question that was keeping her awake at night.

And then it dawned on her. Jennifer Siilata decided that if these high-risk homeless Veterans in California’s Central Valley were not coming into the VA hospital in Fresno to be tested for Hep C, she would go to them.

“For a number of reasons, our homeless Veteran population was not being tested,” Siilata said, “mostly because of things like transportation issues, mental health concerns and drug use.”

There had to be a better way. So Siilata stomped her feet and told her supervisor and the VA Central California Health Care System’s administration team her idea – go out and find the homeless Veterans wherever they are, explain to them what Hep C is and how it affects them, and get them tested and eventually treated.

Miguel Luna, advanced medical support assistant, approaches an area frequented by homeless Veterans in Fresno, Calif. When the team locates homeless Veterans, they ask if they would like to be Hep C tested and if there is anything else they need.

“It only made sense. It’s one of the only viruses that’s 100 percent curable,” Siilata said, “and the VA pays for all our Veterans to be tested and treated.”

Siilata got the approval she needed very quickly and soon she and a small team from pharmacy services were out scouring the city and surrounding areas, working with local homeless organizations like WestCare California as well as the VA social services’ Homeless-Patient Aligned Care Team and looking for homeless Veterans.

“We knew the numbers were high,” said Siilata, who has been with VA for more than 12 years. “It is estimated that about 40 percent of homeless people in the U.S. are Hep C positive, and our data suggests that here in Fresno and across the Central Valley, about 29 percent of the homeless Veterans are infected with the Hep C virus.”

By getting out and meeting these Veterans face-to-face, Siilata believed she could lower those numbers. And so far, it is working.

Over the last few weeks, Siilata and her team have gone out a half dozen times or more in search of homeless Veterans. Each time, the team carefully coordinates and plans their movements and search methods. Using zip codes to divide coverage into sectors, Siilata and her team hit the streets. When a homeless person is approached, one of the first things they do is determine if the person is a Veteran and then ask if he or she would like to be tested.

“It’s really about caring and compassion. We bring water to hand out, hygiene kits to give to them, anything we think they might need. We talk with them, take their questions, get to know them and help with their needs,” said Siilata, who holds a Doctorate of Pharmacy degree from the University of Pacific.

After the team explains the importance of Hep C testing and what the VA can do to help, it is up the Veteran on what they want to do next.

A lot of times it’s not that they don’t know about Hep C. They do know, she said. A lot of them say they had friends who died from Hep C. It’s the leading cause of liver cancer, for example.

Siilata believes they are making a difference, one person at a time. Of all the homeless Veterans the team was able to locate thus far, she said about 25 percent got into the vehicle with them and rode back to the VA hospital to be tested.

And she wants to take it a step further. The VA Central California has a mobile clinic that is used for special events like health and safety stand down days in the Central Valley as well as other events and missions. Siilata wants to take the mobile clinic out to the field and conduct Hep C testing on the spot. And eventually she said she wants to expand their reach, both north and south, across the entire Central Valley.

“She has done some amazing work in conjunction with our social services team and other organizations,” said Dr. Wafa Samara, the Chief of Pharmacy at the VA Central California Health Care System. “Thanks to her, our team has unofficially adopted the motto: ‘If they won’t come to us, we’ll come to them.’”

About the author: Cameron Porter is a Public Affairs Officer at the VA Central California Health Care System