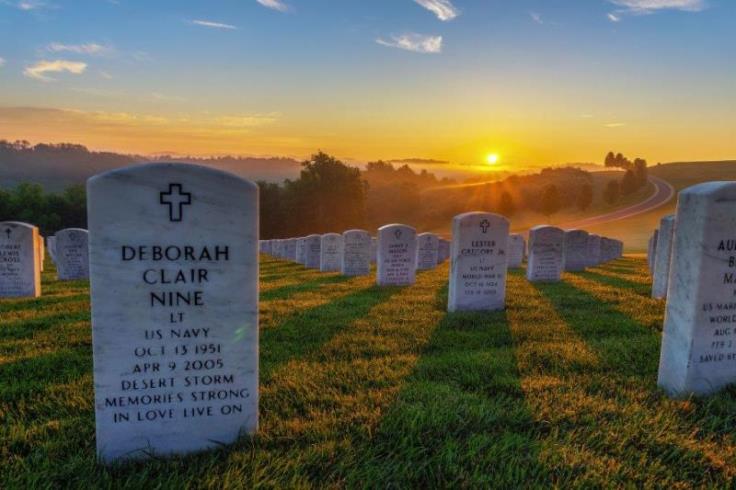 We arrived after close of business at Beaufort National Cemetery in South Carolina’s Lowcountry.

All cemeteries have stories to tell, but this one seems to have more than its share. Nineteen African-American soldiers from the Massachusetts 55th Infantry Regiment were reinterred here on Memorial Day 1989, following discovery of their remains on Folly Island, South Carolina two years earlier. Descendents of these Union volunteers—along with descendents of the all-black Massachusetts 54th Infantry and 5th Cavalry Regiments—gathered that day to honor these fallen troops.

Moviegoers became acquainted with the heroism of the 54th Massachusetts following the 1989 film Glory, starring Denzel Washington and Matthew Broderick. Many scenes from Glory were filmed not far from Beaufort in Savannah, Georgia, and cast and crew members visited with cemetery staff during production.

The cemetery has a further Hollywood connection. Retired Marine Colonel Donald Conroy, father of novelist Pat Conroy, was also laid to rest here. Immortalized in print and on the silver screen as The Great Santini, Colonel Conroy holds the curious distinction of being buried twice at the national cemetery—first as his fictionalized self in the 1979 film, and then following his actual death in 1998.

The cemetery immediately drew me in, both because of its unusual fan-shaped layout and the dense shade offered by rows of majestic trees. The temperature had topped 100 and any relief from the heat was welcome. The iconic landscape familiar to cemetery visitors—and travelers throughout the coastal south—is captured perfectly in a passage from The Great Santini: “Live oak trees, festooned with cool scarves of Spanish moss, and gnarled by a century of storms, loomed over the street.” Many of these trees have kept vigil over Veterans buried here for a century and more.