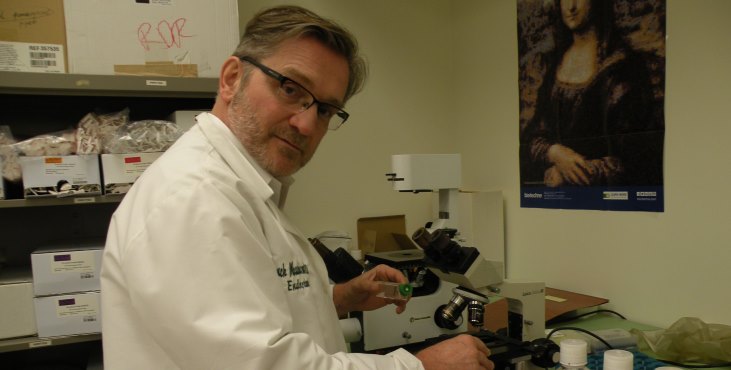 Every time Dr. Franck Mauvais-Jarvis steps into his research laboratory, it’s as if he’s stepping inside the boxing ring.

For the last two years, competing as a middle weight in the Masters division of the Ringside World Championship, he was up against an opponent that was younger, a fast counter puncher and was a four-time undefeated world champion.

“Given his record, he should have stopped me,” said Mauvais-Jarvis. “But he couldn’t.”

“I had to be the aggressor during the whole three rounds. I had to force him to box going backward. It was my only chance to win the match.”

Back in his laboratory with the Southeast Louisiana Veterans Health Care System, Mauvais-Jarvis is up against a similar opponent: one that he says will never rest, doesn’t care who lives or dies, and is working tirelessly not to be discovered. Diabetes.

Mauvais-Jarvis, who recently was awarded a Merit Review Award research grant from VA, is the principal investigator in groundbreaking research focusing on gender differences and the role of male and female hormones in diabetes.

“Drugs used to treat diabetes today are poorly efficient,” said Mauvais-Jarvis. “We need new theories, new treatments to focus on stimulating the pancreas to produce life-saving insulin, but not affect a man’s prostate gland. But to do that, we need targeted delivery.”

Doctors have long known that men with low testosterone are at greater risk for developing Type-2 diabetes. However, for the first time, Dr. Mauvais-Jarvis and his team of six researchers have identified how testosterone helps men regulate blood sugar by triggering key signaling mechanisms in islets, clusters of cells within the pancreas that produce insulin.

His most recent study could help identify new treatments for Type-2 diabetes in the large number of men with low testosterone due to age or prostate cancer therapies.

The findings are particularly relevant for Veterans, especially men over the age of 70, around 20 percent of whom are likely to have low testosterone levels. It is also important for men with prostate cancer, the treatment of which involves lowering testosterone levels. His laboratory is studying the mechanisms underlying energy use in the human body and how this balance is altered in diabetes.

Dr. Mauvais-Jarvis said the study results have not been confirmed in human beings, but the research has far-reaching implications for the treatment of diabetes in both men and women.

“Men and women have different fine-tuning mechanisms that produce insulin,” said Mauvais-Jarvis. “If we can better understand the molecular differences between the sexes, we can start to develop gender-specific medicine to better treat diseases like diabetes. This is the future of precision medicine, by creating a novel molecule that will have targeted delivery of a medicine into a specific organ to treat a disease. Like a drone that delivers a warhead to a target.”

Mauvais-Jarvis has been researching the role of testosterone in diabetes ever since he read a study a decade ago that showed 40,000 Veterans would develop diabetes each year and that number would increase. He believed something more than age was going on to cause the risk of diabetes to rise dramatically in the coming decades.

While the good doctor is not about to give up his fight against diabetes, he’s still undecided about stepping back in to the boxing ring where he finished in second place in both 2015 and 2016 by referee decision.

“A defeat in the lab is just like in the ring,” he said. “You need to re-evaluate your strategy, find a new solution, and do it quickly, because your opponent is coming back to fight. I don’t know if I’ll get back in the ring this year. My goal now is to fight diabetes and discover novel treatments. Diabetes is a much stronger, cunning opponent than any of those I faced [in the ring].”

About the author: Jeff Nowakowski is a public affairs specialist at the Southeast Louisiana Veterans Health Care System.