Home / Honoring Vets / The Jersey Boys: 3 Vietnam Veterans on a mission to ensure the fallen are always remembered

The Jersey Boys: 3 Vietnam Veterans on a mission to ensure the fallen are always remembered 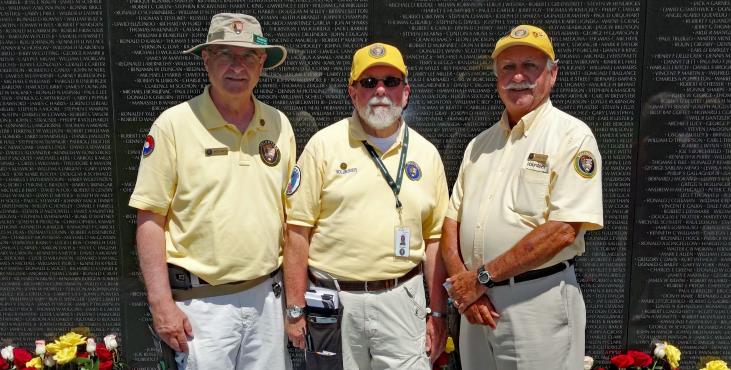 “We couldn’t do it without them,” says Bill Linderman, executive director of the New Jersey Vietnam Veterans’ Memorial Foundation (NJVVMF).

Linderman is referring to the volunteers who give their time and experience to host tours of the New Jersey Vietnam Veterans Memorial and the adjoining museum and education center. The only complex of its kind in the United States dedicated to the Vietnam War era, volunteers are enormously important to the success of the foundation’s mission.

Among the dozens of Veterans who volunteer their time at the memorial, there is a trio of Veterans who have distinguished themselves twice over through their service as volunteers to not only the New Jersey Memorial, but also for The Wall in Washington, D.C. To comrades at the Wall, they’re known simply as, “The Jersey Boys,” an affectionate moniker that has stuck with them even in New Jersey.

Michael Coale, Joe Leone and Michael McMahon wear the label with pride. The Wall is the familiar name for the Vietnam Veterans Memorial, part of the triangle of monuments on the Mall in Washington, D.C. which also includes the Lincoln Memorial and the Korean War Memorial. Each of these men has his own story of how they came to volunteer at both Memorials, but they all share a common purpose, to connect us to those who served in Vietnam – those who fought, many dying, to protect our freedoms and preserve our way of life.

“‘To Remember. To Honor. To Heal.’ I love that tag line,” said Michael McMahon.

McMahon started with the New Jersey Vietnam Veterans’ Memorial Foundation in 2003. He had retired from his post-war career and was looking for something to be involved with – something that felt worthwhile, meaningful. McMahon found that opportunity with the foundation. Not long after he began his work with the New Jersey memorial complex, McMahon met and became friends with Michael Coale, another Veteran and tour guide. McMahon took Coale’s suggestion that he join him in Washington, D.C. for the Veterans Day ceremony at The Wall. It was that trip that convinced McMahon to become a volunteer guide at both Memorials.

“There’s a major difference in the responsibilities and experience as a volunteer between the New Jersey and D.C. memorials,” says McMahon. “In Jersey, tours are scheduled and there’s a script that helps guide us in relating the history and significance of the memorial and the people remembered here. In D.C, we meet visitors at random as they approach The Wall. There is no script or guidelines. We simply talk with visitors, listening to find connections between the War to their own lives and history and to those they came to remember.”

In Washington, volunteers don’t have to be Vietnam Veterans. Volunteers come from as far away as Fairbanks, Alaska, and there is no set schedule. By contrast, the volunteer tour guides for New Jersey are all Veterans living in New Jersey and tours are offered according to a set schedule, with special opportunities designed especially for the hundreds of school groups that visit the memorial and museum each year.

McMahon’s buddy and the ‘other’ Michael, Michael Coale, agree with McMahon’s description of the work and impact of each team of volunteers, at the foundation and at The Wall. Coale began volunteering at the memorial in Washington, D.C., “about 15-16 years ago, and I’ve been with the NJVVMF almost from the beginning.”

Working down in D.C. at the Wall – it’s like making a pilgrimage to a holy place. You meet people from all over the world. They gather from everywhere, from every walk of life and with different life experiences.”  ~ Michael Coale

Coale’s primary motivation is one most Veterans share, “I do this because I don’t want the guys to be forgotten.”

Joe Leone is the third member of the Jersey Boys.

Leone started at the “Holmdel Wall” in 1995, before the museum was even built. He recalls when he started doing school tours, “back then, buses would pull right up to the memorial.”

When Joe tells his stories of the war and its impact, he always pays special attention to two groups – the war dogs and those missing in action. “The War Dogs Memorial was dedicated in 2006 and it is my favorite statue on the grounds,” he said. “It was a tragedy that our government – we left military behind. We don’t do that anymore. Thanks to a good group that lobbied for proper respect and recognition for those military, we now bring our dogs back.”

Leone’s tours also never fail to honor and remember those soldiers who are declared Missing in Action.

“My other passion is the MIA. You want to pass on to people, especially the kids, that they’re not there at the Memorial to get a day off from school. We need that history, we need to remember what the true cost of freedom really is and why we were there [in Vietnam]. As long as we can come here to the memorial, both memorials and tell you about them, their lives will never end.”

“For instance, we brought the education director and the teacher’s network from D.C. and hosted them up here, [in New Jersey] and showed them what we do. We believe there should be a collaborative synergy between what we’re trying to do and what they do.”

In all their tours and presentations, the Jersey Boys invite visitors to learn all they can about the Vietnam Era and its impact not only on the individuals who fought, but also on the entire world. Sometimes students in New Jersey or casual visitors in Washington D.C. will crease their brow when McMahon, Coale or Leone stop them to share facts about the war and put those facts in context with the history of the period.

But none of these Veterans are dissuaded from this important part of their mission as guides. “They need to know why people fought and died,” said Coale. “They need to know what kind of a world sent these men and women into harm’s way and we need to remember the lessons from that experience.”

Big picture, world shaping considerations aside, this work that the Jersey Boys do is deeply personal – and perhaps that’s what makes them such powerful teachers and guides for those who visit both Memorials.

“There’s a calmness that comes over me when I’m at the Wall,” said Leone. “I feel calm. I feel peaceful.”

“It’s the names,” said McMahon. “When you see the names, you know that each one has a story. Each one has a family. To us, it’s a privilege and an honor to do this. It’s a benefit – we need to be there.”

“A calmness, a peace,” agrees Coale. “Yes, that’s exactly what I feel. I think that’s what we all feel. It’s one of the reasons we’ve been back all these years – and we’ll be around for many more.”

Sarah Taggart is the deputy director of the Vietnam Veterans’ Memorial Foundation located in Holmdel, New Jersey. She feels it is truly an honor to work alongside New Jersey’s Veterans and make sure their stories are never forgotten.