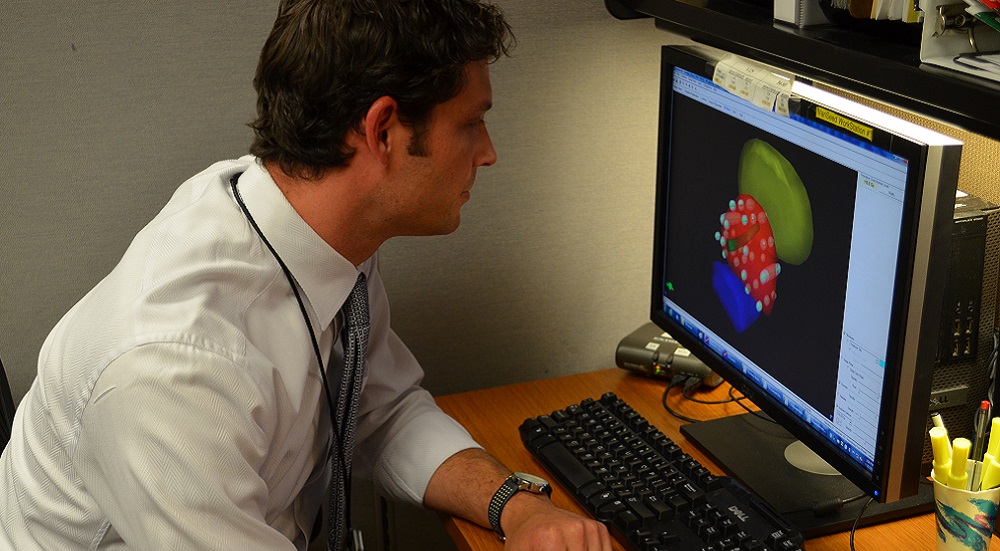 Thanks to the nationwide scope of the Veterans Health Administration, a national referral program has allowed Veterans from around the country to descend on the McGuire VA Medical Center in Richmond for treatment of moderate to aggressive forms of prostate cancer.

Prostate cancer is the second-most common type of cancer among American men, who make up the largest population of Veterans. The most common form of treatment in most VA facilities is external beam radiation, a six to nine week process that involves treatments five days a week.

“So far, we’ve had nothing but positive feedback. It’s a great program.”

At McGuire, brachytherapy offers a much better option for Veterans. Brachytherapy is a form of treatment that involves implanting radiated seeds directly into the prostate, where the seeds attack and eliminate the cancerous cells.

McGuire’s brachytherapy program dates back to the 1997. It was started by Dr. Michael P. Hagan, who is now the VA’s National Director for Radiation Oncology.

Minimal side effects and recovery period

“What we offer is access to high-quality treatment of prostate cancer with minimal side effects and recovery period,” said Moghanaki.

Research has shown brachytherapy to be a more effective treatment for moderate to aggressive forms of prostate cancer. Additionally, the treatment is completed in one day, allowing Veterans to quickly get back to their regular lives.

Veterans from places like Michigan, Minnesota, Oklahoma, Puerto Rico and many other areas around the country have come to McGuire to take advantage of this innovative treatment. It’s only available in a handful of VA facilities, including McGuire.

Research has shown brachytherapy is safer for the patient, minimizing radiation to the prostate area and drastically reducing recovery time.

For Veterans around the country whose local facilities don’t offer brachytherapy treatment, the national referral program gives them a chance to receive top-notch care at McGuire without leaving the VA system.

Leaving no man behind

“Many Veterans prefer to stay within the VA,” said Moghanaki. “We make that happen. It increases access for Veterans in areas where the VA doesn’t offer radiation services onsite. We’re leaving no man behind.”

Nurse Practitioner Sandy Troeschel is the brachytherapy clinical program manager. She helps determine which patients are eligible to come to McGuire for brachytherapy and works with them to make treatment plans.

Using the VA’s telehealth system, she is able to meet with Veterans through a video chat and walk them through the intake process. Once she has the information she needs to proceed, a social worker assists with arranging transportation to Richmond. Often, organizations like Mercy Medical Angels assist with transportation costs for Veterans who need it.

“It has been very successful,” Troeschel said. “Patients have been very happy. It’s a fantastic program and it’s expanding.”

Carlos Alvarez, a Veteran who lives in Puerto Rico, was diagnosed with moderately aggressive prostate cancer.

“The following morning, I was on my way home”

Local doctors were running out of options. That’s when he was referred to McGuire for brachytherapy. From that point on, the process was a quick and easy one, Alvarez said.

After Troeschel determined Alvarez was a strong candidate for the treatment, he came to Richmond for the procedure.

“I went to Virginia, got everything hooked up, they did the procedure and the following morning, I was on my way home,” said Alvarez.

After Alvarez went home to Puerto Rico, the doctors at his local VA were able to follow up with him and had access to all of the information about his treatment at McGuire.

“Everything is documented in their records,” said Troeschel. “It doesn’t matter if things are done here or at their home VA facility, all the information is there.”

For the brachytherapy team, the continuity of care is a key to success.

“We’ve definitely improved access to brachytherapy for Veterans,” said Brachytherapy RN Steven Schlink. “We’re filling a need, bringing people from all over. So far, we’ve had nothing but positive feedback. It’s a great program.”

Approximately 100 brachytherapy procedures are performed at McGuire each year. Some of these Veterans are from the Richmond area, but many are Veterans who have been referred from other areas and who otherwise might have had to resort to weeks of external beam radiation treatment.

About the author: Patrick Gordon is a public affairs specialist at the McGuire VA Medical Center in Richmond, VA.