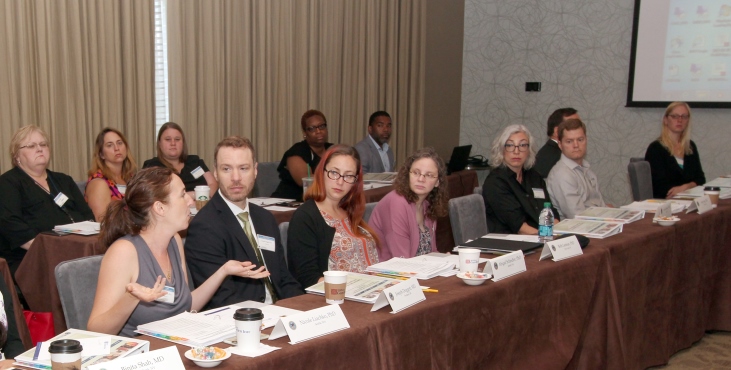 If you happened to be in the nation’s capital in late July looking for a roomful of very smart people, you couldn’t have done better than a small hotel about half a mile from Union Station.

That’s where some 40 early-career researchers came together for the annual VA Career Development Awards (CDA) meeting. All were recipients of CDA funding for biomedical or clinical research, and had completed either the first or third year of their award. The award typically runs three to five years.

The VA programs are highly competitive. The M.D.s and Ph.D.s who get funded are considered an elite group. The awards serve not only to recruit these keen minds into VA in the first place, but also to train them in research and then keep them working in VA, devoted to Veterans’ health.

By all accounts, the program is effective: Among past biomedical and clinical awardees, 7 in 10 have remained in VA, and many of these have gone on to establish independent VA research careers.

The Washington event was part scientific symposium, part nuts-and-bolts workshop, and part support group. What does it take to overcome the hurdles and navigate the passage from junior, mentored CDA researcher to independent investigator? The attendees shared their success stories as well as their trials and tribulations. They gleaned advice, encouragement, and inspiration from their peers, and from the scientist-administrators in VA’s Office of Research and Development who oversee their funded projects.

Dr. Rachel Ramoni, VA’s chief research and development officer, offered brief remarks and led a spirited and candid Q&A with the group to kick off the two-day event.

“We are investing in you, and we’d love for you to stay in the VA,” said Ramoni, who came to VA from Harvard earlier this year. “We’d love, above all, for you to contribute to science and to the real-world care of Veterans. We are here to make Veterans’ lives better.”

A good chunk of the two-day meeting was devoted to brief presentations from each researcher. The presentations covered a wide range of topics: infectious disease, hypertension, PTSD, alcoholism and plenty more. A highlight of the event was a talk from Dr. Clifford Cho, a physician-researcher at the Ann Arbor VA who is a graduate of the CDA program. He studies cancer and specializes in treating Veterans with melanoma, a common skin cancer.

Cho’s lab has shown how certain types of T cells—which attack foreign tissue, including cancer cells—end up being defenseless against the malignant cells. They even go on to kill themselves, rather than continue fighting. But certain T cells, known as memory cells, “are uniquely resistant to cancer,” and therefore may be the holy grail of immunotherapy. His lab showed how mice injected with melanoma tumors reacted favorably to treatment with memory cells, whereas tumors grew out of control in mice treated with other types of T cells.

The challenge now for Cho’s lab is figuring out how to make large quantities of memory T cells available for cancer therapy, as they exist only in tiny amounts in the body.

Cho and the other presenters expressed huge gratitude not only to their mentors and colleagues, but to the Career Development program.

“This CDA has been fantastic,” said Dr. Alan Morrison, a physician at the Providence VA who studies artery disease—one of the leading causes of death for Veterans. “Without this, I wouldn’t have a lab.”