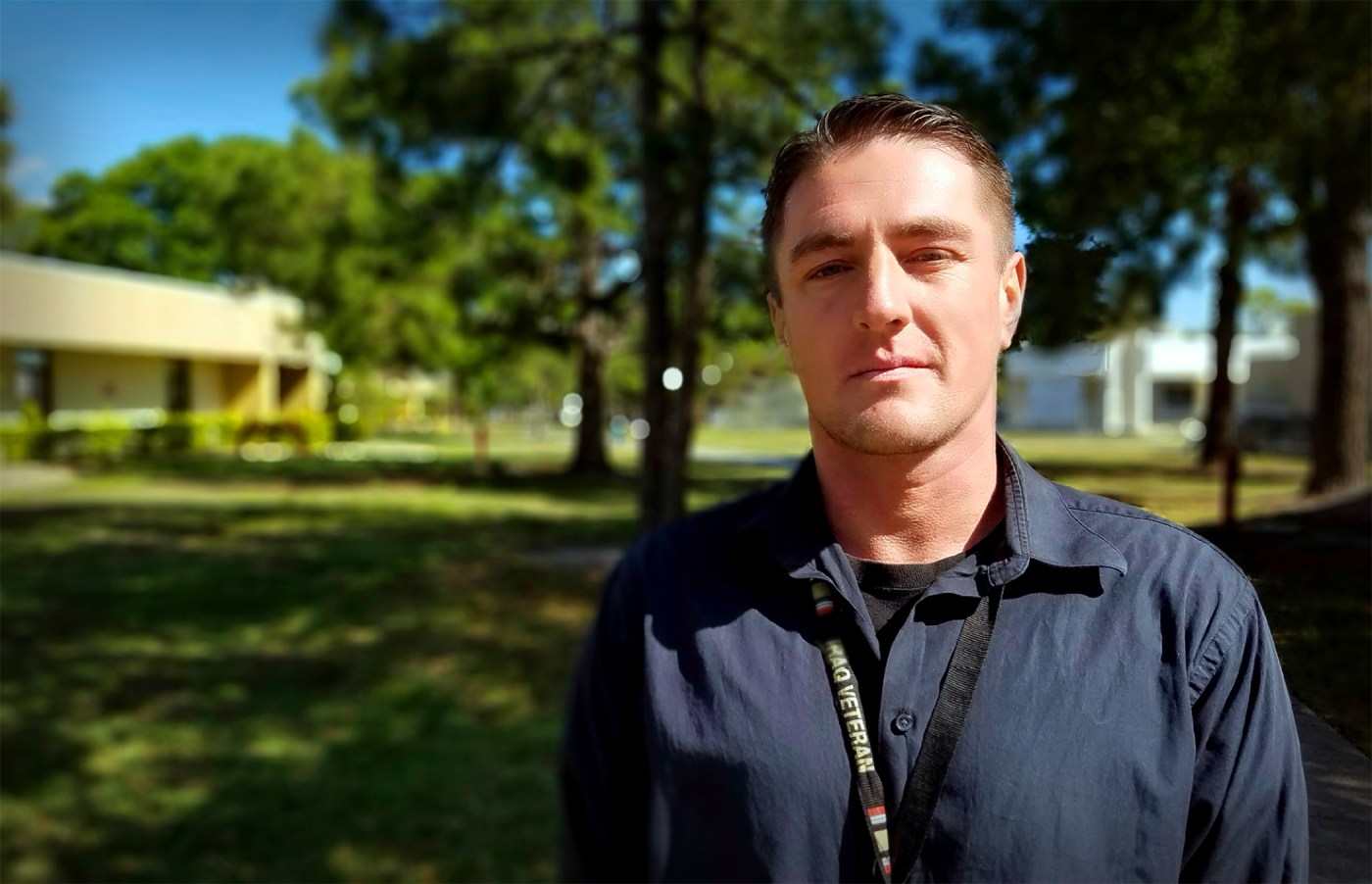 For those who work with and know Ilya Berler, they all agree he is not what some would call a “typical social worker.” Standing nearly six feet tall with partially styled brown hair and youthful appearance, the soft-spoken U.S. Army Veteran projects a stoic, easygoing and driven personality all in one.

As a full-time social worker with the Bay Pines VA for the last four years, he uses his personality and life experiences to help Veterans enrolled for VA health care services.

On most days, Berler is out of the office and on the road assisting homeless Veterans with permanent housing or visiting young, disabled Veterans and their caregivers to ensure their health care services are coordinated appropriately. There is no place he would rather be.

“When I was hired by the VA, I was ecstatic,” he said. “I knew it was the right place for me to work and help others like the VA helped me. The job also validated everything I had done to get to that point in my life – the challenges, adversity, injuries – it was a dream come true.”

Berler’s journey that would ultimately lead to a professional career as a social worker and job with VA started 17 years ago in a small town in Eastern Europe when he was 12-years-old.

“My dad told me to pack my bags,” he said. “There was no warning, and I didn’t ask questions. I just did what I was told.”

Berler’s father had made a decision on behalf of the family to enter refugee status and begin the immigration process to the United States from Eastern Europe – a move he hoped would provide a better future for his son.

To support the small family of two, his father took on various jobs like security and maintenance. They also received assistance from community agencies and families.

For young Berler, the prospect of starting a new life in the U.S. was scary and exciting at the same time. He did not know what to expect. Language and cultural differences were the most challenging.

“Imagine moving to a new place where everything is strange, no one can understand you, and you can’t understand them,” he said. “Learning a new language and adapting to a new way of life is not something you can learn in a day – calling that a challenge is an understatement.”

Over the next few years, Berler adapted and became proficient in the English language through school. Then, in 1997, Berler and his father became U.S. citizens. After years of struggle and adversity, they could now officially call the U.S. their home.

About a year after becoming a citizen and shortly after his 20th birthday in 1998, Berler joined the U.S. Army Reserves as a logistics specialist – a commitment that took him away from home one weekend a month, and sometimes up to two weeks for more extensive training exercises.

“At that time in my life, I had it in my mind that I wanted to serve in the military,” he explained. “Military service runs in my family. It was my turn to serve…so I did.”

Over the next three years, he honorably completed his time as a reservist and entered Inactive Ready Reserve  status – a designation given to soldiers still under contract who no longer have an obligation to participate in training actively but can be called back to reserve or active duty.

Then, in 2004, certified mail arrived at his doorstep. It was from the U.S. Army. He quickly realized he was reading mobilization orders and would soon be deploying to combat in support of Operation Iraqi Freedom.

“I was pretty excited,” he said. “I was considering going active around that time anyway. The orders simplified things.”

Soon, Berler was on a plane to Kuwait where he was assigned to a convoy security team responsible for protecting large military supply convoys in and out of Iraq.

For the next ten months, Berler and other members of his unit completed missions. Then, about eight weeks before they were scheduled to return home, he was thrown from his position on a gunner’s turret after his Humvee driver responded to an enemy threat.

Berler sustained severe injuries due to the fall and was medically evacuated to Walter Reed Army Medical Center. It took nearly five months for him to recover from his injuries.

Ilya Berler 2006 while deployed with the U.S. Army in support of Operation Iraqi Freedom.

At home, he continued to struggle with lasting effects of his wounds both physically and emotionally. His most significant struggles were dealing with symptoms associated with Post Traumatic Stress Disorder (PTSD) and traumatic brain injury (TBI) diagnoses.

“I had a lot of problems concentrating…with cognition and memory,” Berler said. “I had anxiety and tended to isolate myself from others, even close family members. That was about the same time I reached out to the VA for help.”

Berler enrolled for VA health care services at the Minneapolis VA Healthcare System and also decided to go college using the Post 9/11 GI Bill. His goal was to become a social worker.

Over the next five years, Berler committed himself to his studies but not without personal struggles.

“I get inspiration from my work with Veterans.”

“To get through everything, I had to dedicate myself only to school,” he explained. “At times, because of my TBI, I doubted myself. I knew the only way that I could eventually get my degree was to put everything I had into studying.”

And so he did. After obtaining his bachelor’s degree from Metropolitan State University 2009, he went on to earn his master’s degree in social work from the University of Minnesota in 2011.

“When I graduated, I finally felt like I had a real future. It was such a huge personal achievement for me,” he said. “I worked so hard for so long and finally could take a step back and be proud of myself.”

Shortly after graduation, he landed a job with a non-profit social service organization in Jacksonville, Florida. One year after that, he applied for and was hired by the Bay Pines VA to support the organization’s Homeless Veterans Program.

“I get inspiration from my work with Veterans. When I share my story, I think it gives a lot of them hope. I can feel the synergy,” said Berler. “Being here, doing this job is where I am supposed to be.”