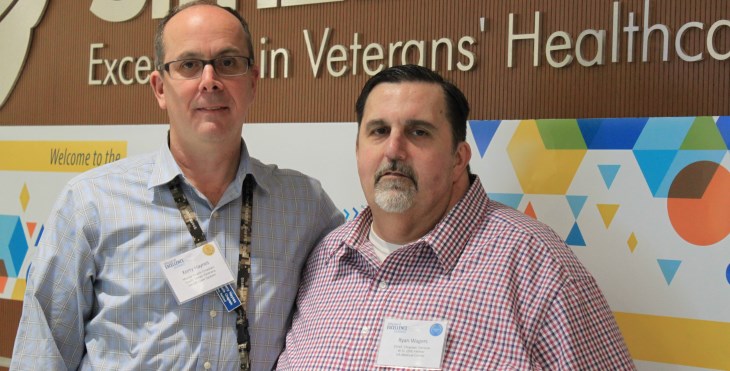 Almost impossible to talk about – and often considered too taboo to even mention – some Veterans suffer from a moral injury, caused by actions such as using deadly force in combat and causing the harm or death of civilians. Others may experience guilt from giving orders in combat that result in the injury or death of a fellow service member or failing to report a sexual assault or rape.

A fairly new term, moral injury is defined as a wounding of the conscience. It’s caused when an inner conflict operates as the hidden wound behind Post Traumatic Stress Disorder (PTSD). Those suffering from moral injury tend to isolate themselves out of guilt, shame and distrust of others.

Kerry Haynes, mental health chaplain and Gold Star Fellow at South Texas VA Health Care System, created the Chaplain Groups for Veterans with Moral Injury to bring peace of mind — and soul — to Veterans suffering from a wounding of the conscience, whether from their own involvement or the action of someone in authority over them. As a chaplain, he helps Veterans draw on their spiritual or religious resources to move towards health and recovery. As a mental health chaplain, he specializes in helping Veterans from a spiritual perspective find greater health and recovery, even with their mental health diagnosis.

The  group offers Veterans an eight-week series of chaplain-led group discussion sessions in a safe, non-judgmental environment. It is in these sessions where chaplains help Veterans embrace the concept of forgiveness of self and forgiveness of others. The program helps build trust between Veteran participants and others through genuine, open conversation.

“Others never really touched on suicide or dealt with the social aspects of emotions, not really understanding the tools necessary to dealing with the social repercussions of my conditions,” one program participant said.  “Other soldiers and Veterans would do well to have someone help them learn to deal with their suicidal thoughts.”

Results show the concept is working. Using a “self-forgiveness scale,” Veteran’s work was measured before and after the series. Veterans averaged a 26-percent increase in self-forgiveness indicators, which hopefully means they are free to enjoy a life filled less with guilt and more with happiness.

As moral injury may often be a factor in some suicides, whatever can be done to help Veterans find peace of mind and recovery is critical and the feedback from Veterans on the practice is encouraging. Haynes notes that Veterans seem to leave the group much better off than before.

In addition to working with Veterans, chaplains also provide advice and assistance to family members, stressing that it is crucial to continue their love and support. While taking necessary precautions to guarantee their own safety or the safety of children, family and friends should continue to insist Veterans who need help reach out for it– whether through a VA Vet Center or the Veterans Crisis Line.

The Diffusion of Excellence Initiative

This article on Faces of Innovation is part of a six-blog series about the Gold Status Fellows and Implementing Facility Fellows participating in the Diffusion of Excellence Initiative.

The Diffusion of Excellence Initiative identifies and disseminates promising practices, as well as standardizes those that promote positive outcomes for Veterans system-wide. It empowers employees to share innovations and drive a supportive culture of continuous improvement. Through the Initiative, VA’s Veterans Health Administration has identified more than 1,000 practices submitted by VHA frontline staff that address the USH’s priorities of improving access, care coordination, employee engagement, quality and safety, and the Veteran experience.

About the authors: Tiana Bouma and Vanessa Roundy work for Atlas Research, a healthcare advisory consultancy.