Home / Health / Veteran talks about suicide to help other Veterans

Veteran talks about suicide to help other Veterans 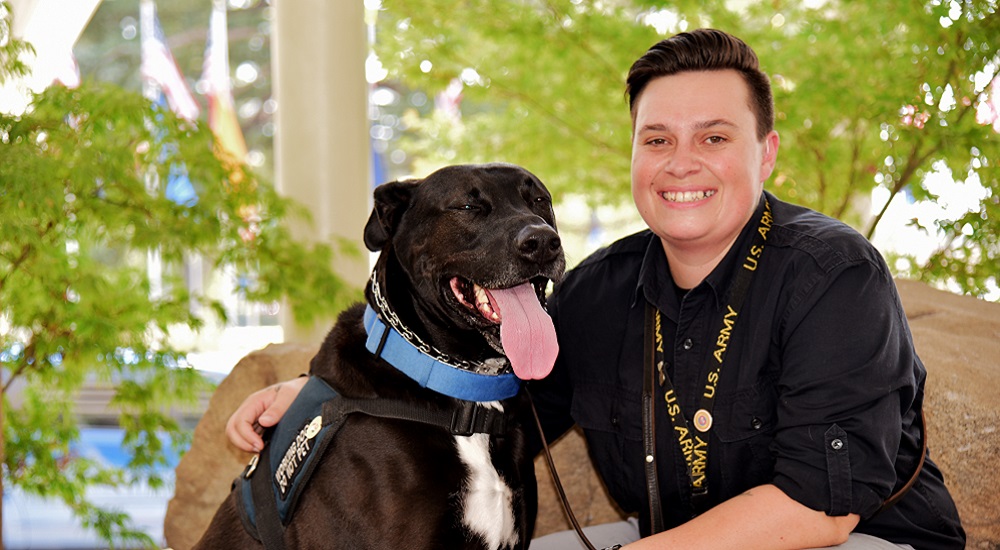 She tried to take her own life eight times in one year while serving as a soldier in the 4th Infantry Division in 2008. The stressors of combat, losing a couple of very close friends in battle and adapting to life back in the U.S. after serving in Iraq was too much for her to handle.

And when she left the Army a few months later after being assigned to a wounded warrior unit – and she came back to Fresno where she grew up – things didn’t get any better. But she went to VA for help, and the process of healing began.

Alexandrea Gries, now a peer support specialist with the VA Central California Health Care System, has come a long way in eight years thanks to the VA in Fresno and the people who work there, she said.

Starting out at the VA as a volunteer and work study student, escorting patients by wheelchair and working in the canteen store, the kitchen and then the coffee shop – Gries said she realized right away VA was a place she could relate to, and the people there were people she could relate with.

“I developed a very strong kinship,” Gries said. “I love these people, and this is the only family I have now.”

“Alexandrea Gries is a true leader. She has impacted so many lives in a positive way, and she’s been through so much,” said Mary Golden, the VA CCHCS Voluntarily Service Program manager.

Although she knows she’ll probably never fully recover from the scars of war, Gries said she believes the healing starts with sharing her experiences with others.

“I slit my wrist in December of 2008 and ended up in a hospital. I was fully intent on ending my own life,” said Gries, who suffers from both Post Traumatic Stress Disorder and Military Sexual Trauma. “I developed an infatuation with death, and all I could focus on was killing myself.”

A lot has changed since then, though, she said.

“When I first started working at the VA as a volunteer, I pushed wheelchairs six days a week, nine hours a day. But I love these Vets, and I didn’t do it for any reason other than that,” said Gries, who served as a .50-caliber machine-gunner during convoy missions in Iraq.

Gries said that while in Iraq, her roommate there was killed by a suicide bomber. Three weeks later, she watched one of her best friends die from a single sniper round on the side of the road.

“I had survivor’s remorse for a very long time, and I’m still recovering, but the VA is probably the single biggest reason why I’m still alive. And I’m not going anywhere.”

Gries works for the homeless program under VA CCHCS’ Social Work Service. She’s now a full-time employee with the VA, and her work puts her directly in front of Veterans in need nearly every day.

“I try to share my experiences with these Veterans and help them overcome their own obstacles and issues,” she said.

“Helps them understand they are not alone.”

Her area of responsibility, the counties of Tulare and Fresno, encompass an area that includes many Veterans in need – some who are homeless or living in poverty and some who are experiencing the same suicidal ideologies she did.

“My job is to share my experiences and build trust so they too will seek help from the VA.”

And to this day, Gries continues to seek help from the VA herself.

She facilitates a peer support group once a month and sees a counselor regularly for her PTSD and Military Sexual Trauma. She also uses the Women’s Health Clinic at the VA regularly, and she recently applied for and was granted a VA Home Loan. The VA has connected her with non-VA resources, as well. She owns a beautiful service dog named Sherman who she received from Operation Freedom Paws, and she sees a speech therapist using the VA’s Choice program.

“Helping my fellow Veterans at the VA has made me whole again,” said Gries. “At this point, I wouldn’t dream of doing anything else.”

If you or anyone you know is experiencing suicidal thoughts, please call the Veterans Crisis Line at 1-800-273-8255, and press 1.

About the author: Cameron Porter is a Public Affairs Officer at the VA Central California Health Care System.