Home / Health / Updates from Houston: VA employees from around the country assist with recovery efforts

Updates from Houston: VA employees from around the country assist with recovery efforts 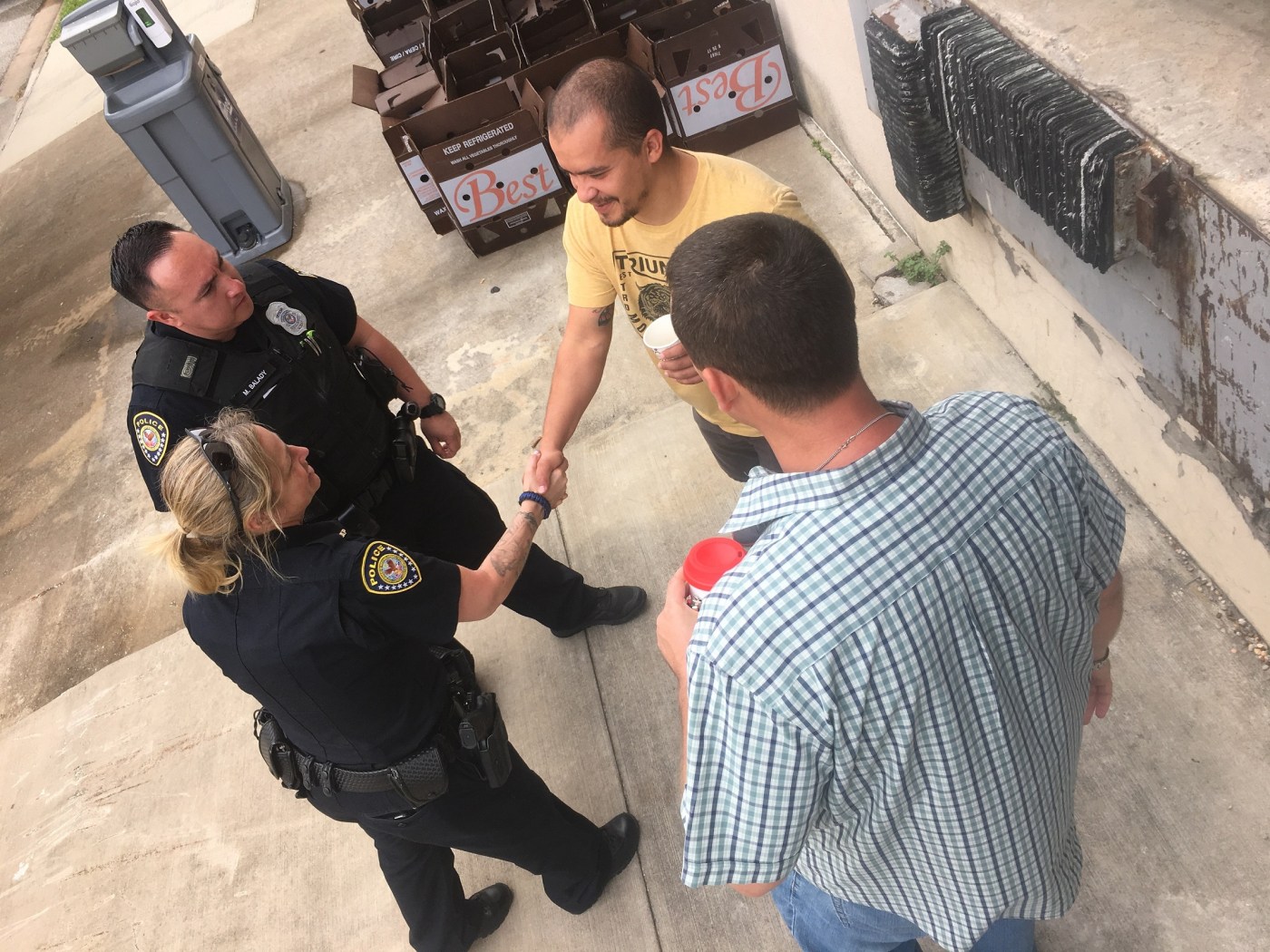 VA Police are a unique force of uniformed officers. They don’t normally stand post on the streets, they patrol their federal medical facilities throughout the United States. In Houston, they not only protect the Houston VA, they protect the Veterans, employees, and property placed in the communities providing support as part of the Disaster Emergency Medical Personnel System (DEMPS).

The DEMPS is VA’s main deployment program for clinical and non-clinical staff to an emergency or disaster. DEMPS personnel are currently operating in mobile medical units (MMU) and mobile pharmacies in Houston, and are prepared to travel any distance where medical assistance is needed.

“I talk to all of our VA staff and make sure they know we are here and will assist in any way we can,” said Matthew Balady, a VA police officer from the Phoenix VA Health Care System. Balady, a U.S. Marine Corps Veteran, adds, “If they do have any issues that may need a police presence, we are here. We really just want to make sure the Veterans can get the assistance they need, and we fully understand they are going through a difficult time.”

“Safety is paramount”, added Balady. “It is a stressful time, stress is high, it is understandable that anyone can get frustrated. Our goal is to make sure that both the Veterans and staff are safe. Ensuring Veterans are safe, in a safe environment, to receive their care is paramount.”

A look inside Houston VA’s Emergency Department during Hurricane Harvey

Wild Hurricane Harvey stories are easy to find in hard-hit Houston these days. Even just the act of trying to get to work was treacherous for many. Houston VA’s  Emergency Department chief Dr. Hossam Safar is among that group.

Safar recalls driving his SUV through driving rain and high water, seeing all the dashboard warning lights light up, feeling the car begin to jerk and feeling the tires lose traction with the pavement.

At one point, Safar pulled off the flooded road onto a parking lot to contemplate what to do next.

“I needed to be there to make sure Veterans and my staff are taken care of,” Safar said.

Many staff members on the Houston team worked 36 hours straight without rest.

During the days that followed Harvey’s landfall, Dr. Safar and a few other staff members went to a nearby grocery store and stood in line to get in because the store was only allowing 20 people into the store at a time. It had just reopened. They picked through sparsely stocked shelves and filled up a whole basket to augment supplies provided by the Houston VA Food and Nutrition Service. The ED team shared family style meals together whenever they got a chance.

“The staff members were not panicked but they were concerned,” Safar explains. “Many couldn’t get to kids so we consoled each other,” Safar proudly said, “We are a family here.”

Safar is thankful for the much-needed assistance from nurses sent by VA from other facilities through the Disaster Emergency Medical Personnel System. They came from San Antonio, Dallas, Oregon, Idaho, Atlanta, and Tampa allowing VA Houston staff members to go check on their families.

The grandson of an American citizen who fought in France during the first World War, Safar loves his job. When he started 20 years ago, he was doing a favor for a friend whose wife was the chief of the emergency department at that time. His plan was to stay 6 months and then move on.

Safar has been at the Houston VA now for 20 years, 18 of those as the Emergency Department chief, and he says he wouldn’t change a thing.

“I love the population we serve. They were promised medical care and at least we can take care of their health. We owe them.”

As soon as Seth Chandler, the Spinal Cord Injury (SCI) chief in San Antonio heard about Hurricane Harvey and that there might be a need for help at the Houston VA Medical Center SCI, he sprang into action.

He and his wife, who is an Air Force physician, came together quickly and adjusted their schedules both at home and at work allowing Chandler to answer the call. When the call came, he was ready.

Determined to get to Houston as soon as possible, Chandler caught a ride with a Veterans Canteen Service delivery van and arrived on August 29. Because hotels were not available in the Houston area at that time, Chandler spent the first five nights on an air mattress in administrative office space. Dr. Sally Holmes and Dr. Carol Bodenheimer at the Houston VA SCI had both worked five days straight before Chandler arrived. They expressed extreme gratitude when he relieved them to go check on their families.

“I could see right away the staff in Houston are very much like a family,” Chandler said. “Two nurses in SCI experienced catastrophic property losses. But even through all that, their dedication to the Veterans remained constant.”

As for the Houston SCI patients, Chandler said one was evacuated from his home by Coast Guard helicopter and brought to the VA. Many SCI patients are extremely vulnerable due to the severity of their injuries or health conditions and must have close care to maintain their health.  Chandler was glad to be there to assist the Houston SCI team and these Veterans during his time at Houston.