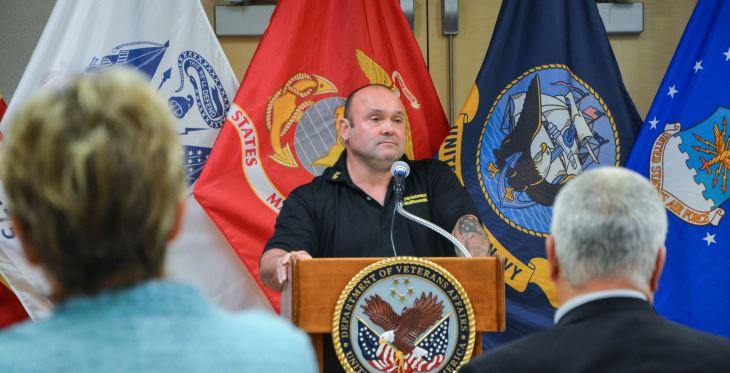 More than 100 Veterans participated in the Be There Phoenix Resource Fair hosted by the Phoenix VA Health Care System and community partners at the Carl T. Hayden Medical Center Sept. 13.

The Phoenix VA, Arizona Department of Veterans Services, Phoenix Regional Office and TriWest teamed up to create a resource fair with more than 20 local partners to provide Veterans a multitude of services while focusing on suicide awareness.

“September is Suicide Prevention Month. However, I think it is important to remember that suicide prevention should be on our minds every single day,” said Phoenix VA Health Care System director Rima Nelson. “One suicide is one too many. We don’t have to be mental health experts or providers to be able to address suicide or to prevent it. It takes all of us to be informed, to understand the signs and symptoms, and to recognize how we are able to help.”

Veteran suicide doesn’t just impact the Veteran, but leaves a lasting impression on loved ones and even those only vaguely familiar with Veterans through other people. Chris Norton, Phoenix Regional Office director, told the audience about his brother’s return from a deployment in 2003.

“He was never in direct combat, but he and his guys were in the thick of it,” Norton said. “Shortly after he came home, he lost two guys in his unit (to suicide), and I know what that did to him and what it did to me,” Norton said.  “He might have been 35 years old, but he’s still my little brother, and I hate to see anyone hurt like that. I remember thinking ‘what can I do to help.’”

Nelson and her counterparts with the Arizona Department of Veterans Services, VBA and TriWest signed a pledge at the end of their opening remarks to help prevent future Veteran suicides before turning the audience over to the keynote speaker.

Mar Raciti, a retired Army major and combat Veteran, authored the book “I Just Want to See Trees,” which details his struggles with suicide ideations and how with the help of his wife Sonja, a clinical psychologist, he overcame his struggles.

The 24-year Army Veteran noticed symptoms of PTSD in 2007 while he was stationed in Hawaii. Raciti said he stood before a colossal tree on the Northshore contemplating which of the branches would best support his weight.

“I had a nylon rope in one cargo pant pocket and letters to my children in the other,” Raciti explained. “I thought I was ready to go, but I lost my nerve.”

Though Raciti didn’t go through with his plan, the suicidal ideations persisted. He said he hoped with each initial deployment he wouldn’t come home, but one day while deployed to Africa he summited Mt. Kilimanjaro.

“I figured if I was 20,000 feet above sea level then maybe I’d be closer to God,” Raciti said. “I wanted forgiveness, and I wanted God to relieve me of my suffering. Standing at 20,000 feet all I saw were clouds and birds flying over them. It was the most dramatic backdrop as the sun rose and touched my cheek.”

Raciti returned to Hawaii with a renewed sense of being and shortly thereafter met his wife Sonja who helped him cope with his PTSD. Sonja accompanied Marc at the Phoenix event and had a breakout session to discuss her experience and expertise with Veterans and their families.

The resource fair is just one of many initiatives by the Phoenix VA and their community partners to curb the rates of Veteran suicide. For organizations interested in becoming community partners or Veterans and family members interested in learning more about how to help prevent Veteran suicide, visit the Be Connected website at www.beconnectedaz.org. For Veterans in crisis help is available 24/7 at the National Veterans Crisis Line at 1-800-273-8255, option 1 or at 1-866-4AZ-VETS.

About the author: Macario Mora is a public affairs specialist for the Phoenix VA Health Care System.