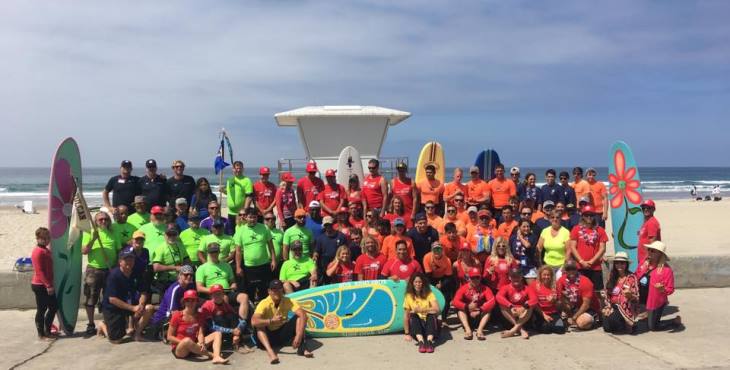 The VA Summer Sports Clinic is in full swing in San Diego, California. Teams raised their guidons to kick off Monday’s events and cheered each other as they tried their hands at surfing, sailing, kayaking, archery, and cycling.

Second-time attendee, Kyle Kilchrist of St. Louis, was excited to be back on a surfboard as his wife of 27 years, Shannon, shouted encouragement for the shore.

The Kilchrists were college sweethearts and he credits her with so much of the positiveness in his life. “She was with me before I left for Desert Storm and she was there waiting for me when I got home,” he said.

Kilchrist spoke highly of his experience with adaptive sports, but mostly of the relationships and the people he has met along the way.

“Everyone has a different story, different experiences, and different skills – which is what makes this such a special experience,” he said, adding that he is considering coming back as an ambassador next year “if the Lord has that in his plans.”

Another Veteran from St. Louis, Jason Pilarski, was also eager to get out and see if he would sink or swim. Turns out, he’s a natural. With less than 30 minutes of instruction, he was up on the board and riding in the waves by himself.

“I was a little nervous that I’d end up with my face below the water the whole time, but as soon as I got out there I felt comfortable and was able to get up. I may need to move to San Diego and be a surfer,” Pilarski said.

When asked how they got involved with adaptive sports, both Kilchrist and Pilarski pointed immediately to their recreational therapist, John Schmeink who works for the VA St. Louis Health Care System.

“He got me involved in different activities like skiing and now surfing. He was there encouraging me to try new things and be more involved with these types of activities,” Pilarski said.

Schmeink is attending the games with four Veterans from his medical center and watched with pride as they all paddled out into the water and rode the waves in.

Teams Titan and Vulcan will move on to one of the other adaptive sports events tomorrow, and other teams will get their chance to face the waves in La Jolla. But after day one, spirits are high and the energy around the games can be felt. Everyone is eager to see what’s in store for the rest of the week and to set new goals, make new memories, and share new experiences.

About the author: Jessica Baxter is a public affairs specialist with VA’s Office of Public and Intergovernmental Affairs in Los Angeles.