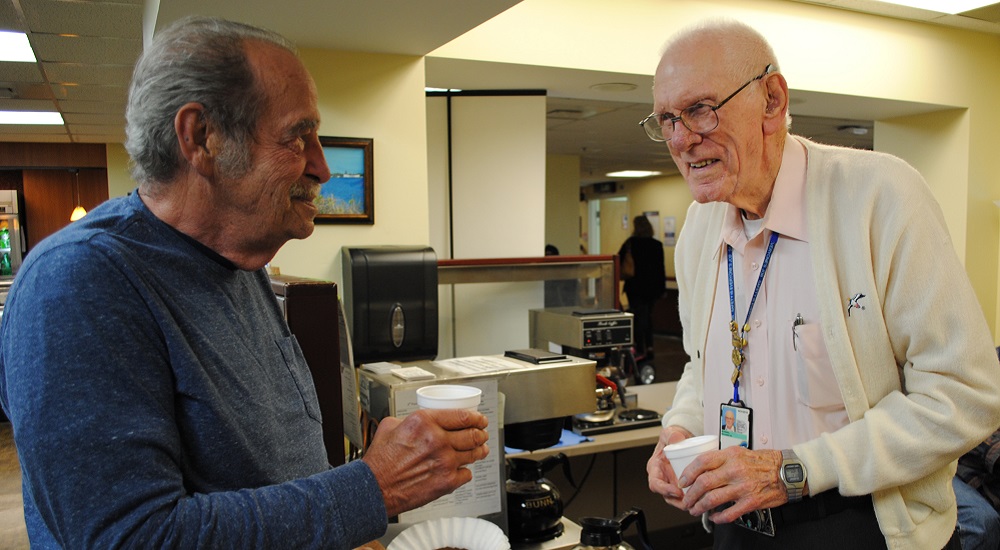 In the 1980s, Veteran Rick Bohnke began coming to the Huntington VA Medical Center for his care.  About a decade later, he signed up as a VA volunteer and for the first 10 or so years he drove for the Volunteer Transportation Network, helping to take patients to and from their medical appointments.

Nowadays you can find him popping popcorn or working at the volunteer coffee desk on the ground floor. Turning 90 last May, Bohnke has remained an active, highly visible Veteran both at the medical center and in the community.  He serves on the Veterans Honor Guard at funerals.  He is also a skilled photographer who is often seen capturing meaningful shots of VA events and community programs.

When asked why he volunteers at VA, Bohnke says, “I wanted to keep myself occupied, and I couldn’t think of anything better than to help my fellow Veterans.”

When Rick Bohnke entered the Army Air Corps in 1945, he didn’t go the traditional route through boot camp. Bohnke was a senior in high school when he enlisted in what is now known as the U.S. Air Force. Because of his typing and clerical skills, he was immediately sent to Camp Atterbury in Indianapolis to help process the soldiers returning from World War II.  Some weeks later, Bohnke returned home to receive his diploma, and then was sent away again, this time for basic training. From there he served in various clerical roles until the middle of 1956; during two breaks in his service he went to college.

On three occasions, Bohnke served on the USS Admiral Elberle. His most memorable time on the ship was riding out a horrible typhoon when it left Okinawa, Japan. In fact, Bohnke said the captain knew the typhoon was coming and headed straight out into it. “I went up to the bridge and the bow was going down in the water like a submarine,” Bohnke said. “I was too scared to be afraid.”

One of Bohnke’s proudest achievements was serving as the longtime chairman of the Veterans Committee for Civic Improvement.  When he took over in the late 1970s, the committee was on the verge of folding. His goal was to revive the committee and bring the local Veterans service organizations together collaboratively for first the Memorial Day program and later for the community’s annual Veterans Day parade and program at the Veterans Memorial Arch.

By the late 1990s the Arch, which was dedicated in 1928, had suffered from the ravages of time.  Bohnke played an instrumental role in saving the Arch, raising $75,000 for its renovation and preserving it as a beautiful, unique memorial to heroism and military service.  In 1999, Bohnke helped bury a time capsule in front of the Arch. The time capsule is slated to be opened in 2050.

About the author:  Debbie Brammer is a public affairs officer for VA.