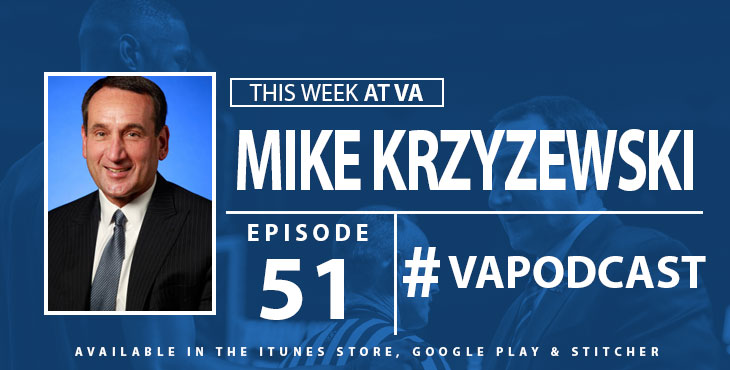 I’ve published more than 500 podcast episodes in my podcast career. A couple times a year, there’s usually an exciting interview, one that feels like a badge of honor. This week’s episode of This Week at VA features the epitome of those interviews. Thanks to a colleague and the great folks at Duke, I had the opportunity to interview Mike Krzyzewski, coach of the men’s basketball team at Duke University. As many of you know, Coach K has won multiple NCAA championship titles and is considered a legend in the sport. What many people may not know, is that he is a West Point graduate and a former Army officer. Coach K talks to us about his decision to go to West Point, transitioning from military to college coaching, developing young players, and his experience in the Army.

About Coach Mike Krzyzewski (before his career at Duke):

Coach K’s disciplined, mentally tough teams can be seen as an extension of his own upbringing. Krzyzewski went to West Point and enrolled in the U.S. Military Academy to receive a quality education, play basketball and become an officer in the Army. From 1969-74, Krzyzewski served his country, directing service teams for three years and serving a two-year stint as head coach at the U.S. Military Academy Prep School in Belvoir, Va. In 1974, he resigned from the Army having attained the rank of Captain. When Coach K was just 26, Knight, his former coach at Army, offered him a graduate assistant-ship at Indiana University. That 1975 squad posted an 18-0 mark in the Big Ten and a 31-1 overall record. Prior to his arrival at Duke in 1980, Krzyzewski spent five years building the program at his alma mater in West Point. He led the Cadets to one NIT berth, one ECAC playoff appearance and an overall record of 73-59.