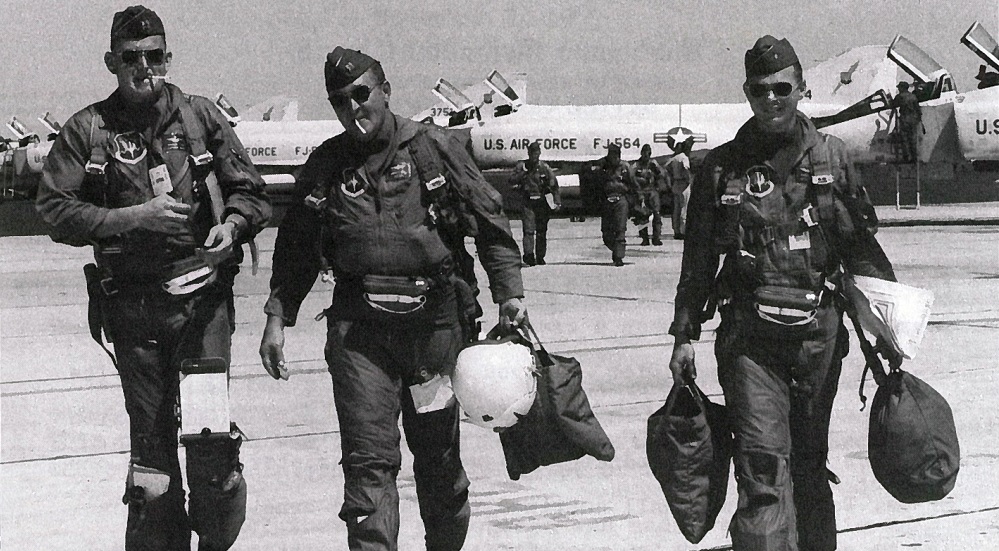 When he introduced himself to a patient, the Veteran gave him a closer look and asked if they had ever met:  “I know you from somewhere.”

The two men had never met, but when Keirn repeated his last name, the patient had tears running down his face.

“Yes, that was my grandfather.”

The patient then told Keirn how Pop had saved his life as a POW in Vietnam and cared for his wounds. He told about the beatings and interrogations Pop took for all the other prisoners and how, “If it weren’t for Pop, I’d never survived.”

Pop Keirn is in the middle of the photo above, leaving for Vietnam from MacDill Air Force Base.

On September 11, 1944, high above the Ore Mountains on the Czech-German frontier, a formation of B-17G Flying Fortresses escorted by P-51 Mustang Fighters clashed with the Germans in a ferocious air battle.

Keirn’s plane was hit and the Captain ordered everyone to bail out. Keirn was taken as a prisoner of war and was held prisoner until the camp was liberated just after victory in Europe (VE) Day on May 8, 1945.

Keirn returned home to start a family but reenlisted during the war with Vietnam.

Twelve days after being “in-country,” Keirn filled in for another pilot on sick call and was the command pilot for a mission over Hanoi. When his Phantom took a hard-vertical hit, Keirn parachuted to the side of a mountain and was captured the next day.  He fractured both ankles, sustained flash burns on his face and upper body, and carried a piece of shrapnel in his leg until he was released.

Keirn’s wife and two teenage children were told the military had lost contact and he may be dead. His grandson tells of that emotional moment in this video. It wasn’t until a famous photo surfaced during an abusive POW parade through Hanoi that Keirn’s family found out he was alive.

Keirn spent the next seven years as a POW until finally returning home in February of 1973. He retired as a colonel in June of 1976 after 33 years of service.

He cared for many of the POWs while in camp and many attributed their survival to his guidance.  As fate would have it, one of those young Vietnam POWs would later meet Keirn’s grandson at the VA hospital in Tampa, Cory Keirn.

Cory Keirn’s call to service is indelibly engraved in his DNA. Although his father, Steve, did not want him to join the military because of what Pop had endured, he found another way to serve.

Cory loves serving Veterans and active duty soldiers every day. Just like his grandfather, he takes care of those who have sacrificed everything to protect our freedom.

About the authors: Megan Kon, is a public affairs specialist and Dr. Cory Keirn is a physical therapist at the James A. Haley Veterans’ Hospital in Tampa, Florida.