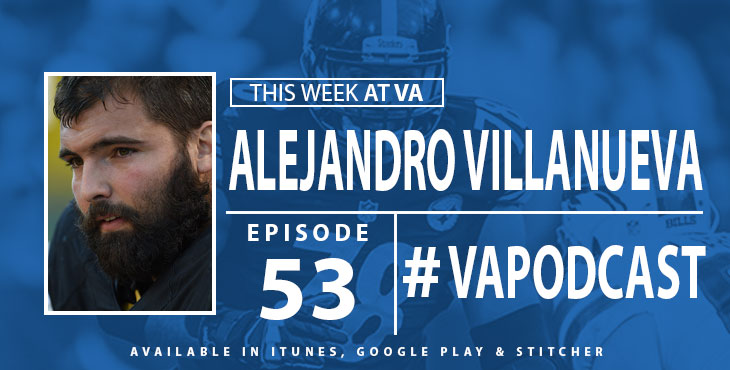 One great thing about podcasting is the ability to think, “hey, I want to talk to that person,” and then taking action to make it happen. When I learned that Steelers offensive tackle Alejandro Villanueva is a former Army Ranger, I knew I wanted to talk with him. Al was nice enough to make time for This Week at VA and spoke to us about his experience in the military, transitioning to the NFL, and being a Veteran in a high-exposure arena.

Alejandro attended SHAPE American High School (Casteau, Belgium) and after graduating from West Point, he spent 2010-13 serving as an Army officer and served three tours in Afghanistan. He earned numerous honors for his service, including the Bronze Star Medal for Valor, the Ranger Tab, the Parachutist Badge, Afghanistan Campaign Medal with Campaign Star, Global War on Terrorism Service Ribbon, NATO Medal, Combat Infantryman’s Badge and Expert Infantryman’s Badge. He is the son of Ignacio and Mati Villanuev. His father was a Lieutenant Commander in the Spanish Navy and also worked for NATO throughout Europe.