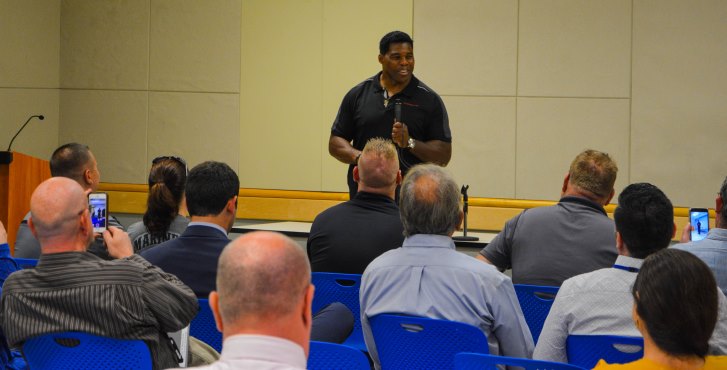 Football legend Herschel Walker shared his battle with dissociative identity disorder with a packed room of Veterans and VA employees earlier this month at the Carl T. Hayden Medical Center in Phoenix.

Walker, the 1982 Heisman Trophy winner, Olympian and MMA competitor, shared through humor his life story from his humble upbringing in a Georgia town of 2,100 people to his football stardom as the Dallas Cowboys running back and, finally, his battle with mental illness, when he no longer had athletics to quell his anger.

“I didn’t have a coping mechanism anymore,” Walker said of his retirement from football. “Some might use drinking or drugs to cope, but when I was angry, I would run fast. When I left sports, my anger came back.”

Walker said it all came to ahead when voices told him that a delivery driver had disrespected him. He followed the drive with the intent to shoot him, but his fury toward the man dissipated after noticing a religious bumper sticker on the delivery truck. He said he felt like he was losing his mind, so he sought help from a pastor who convinced him to see mental health doctors. The doctors told Walker that he exhibited signs of dissociative identity disorder.

Walker said he initially refused to believe the doctors, but he continued his struggles, frightening family with games of Russian roulette and aggressive behavior. He said eventually saw the light and checked himself into a behavioral health hospital in California.

“I remember sitting in my first group session listening to these stories,” he said. “I said to myself ‘I’m not like these people. They’re crazy.’ So, I decided to lie.”

However, Walker said he eventually began to change his initial perception of the hospital and accepted that he was struggling, allowing himself to receive help. He told the crowd of Veterans and VA employees that he initially thought you were less of a person if you sought help, but he changed his perception with the help of the hospital staff and other patients.

“Life is not easy, but if you keep looking up, I can promise you that you will get through,” he said. “You will get knocked down, but you must get back up. Batman, Superman and the Hulk don’t exist, but you do. You put it on the line. You’re the real heroes.”

For general information about the mental health services provided by VA, visit your local VA medical center or Vet Center. For Veterans in immediate need to speak to a mental health professional please call the Veterans Crisis Line at 1-800-273-8255, press 1.

About the author: Macario Mora is a public affairs specialist for the Phoenix VA Health Care System.