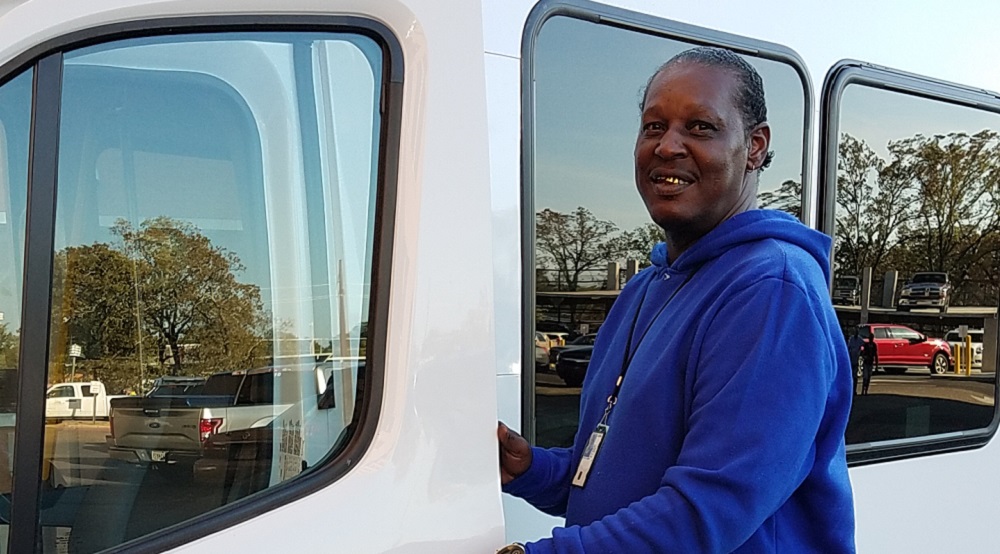 When Marine Veteran Elbert White walked out of prison in 2013, it was nothing short of a miracle.  White, born in Shreveport, Louisiana, but raised in Los Angeles, was serving a life sentence for selling drugs.  In the early 1990s when he was sentenced, he fell under the Habitual Offender Law (three strikes and you are out).  He served 20 years and was released on a special program, House Bill 543, for non-violent offenders.  He was the first person to be released under this provision.

Imagine being locked away 20 years and walking into a new world.

“I felt like I was in an episode of Star Wars,” White said.  “There weren’t cell phones and all this modern technology when I went in.  I had to hustle to catch up,” he said.

White settled back in Shreveport, where he had family.  Not sure what to do with this second chance he had been given, White took the advice of a family member that encouraged him to enroll with VA. He came to the Overton Brooks VAMC and next thing he knew, he was enrolled in the Compensated Work Therapy (CWT) program.

“This program was just what I needed,” White said.  “They taught me how to write my resume, how to present myself, what to say in an interview.  I had never experienced anything like this before.”

“I love my job,” White said enthusiastically.  “Every day I get to give back, helping fellow warriors that served.  Without VA, I could never have achieved this level of success in my life.  VA saved me, they inspired me, they stood by my side.  All I had to do was trust them.  And I did.”

White encourages any Veteran in the community to seek out VA and let them make a difference.

“They will help you if you want to be helped,” White said.

White also attributes his recovery success with having the support of family and friends.  And most importantly, he said, is to have a positive attitude.

“I had to leave all those friends that I used to hang around with that were doing bad things and had negative attitudes,” he said.  “I have friends now that are successful in life and they have positive attitudes.  I love being positive and I love helping others.  This is a win-win.”

October is National Disability Employment Month. Compensated Work Therapy (CWT) is a Veterans Health Administration clinical vocational rehabilitation program offered at every VA medical center. The mission of CWT services is to provide support to Veterans living with mental illness or physical impairment with barriers to employment to secure and maintain community based competitive employment.

About the author: Mary Kay Gominger is a Public Affairs Officer at the Overton Brooks VA Medical Center