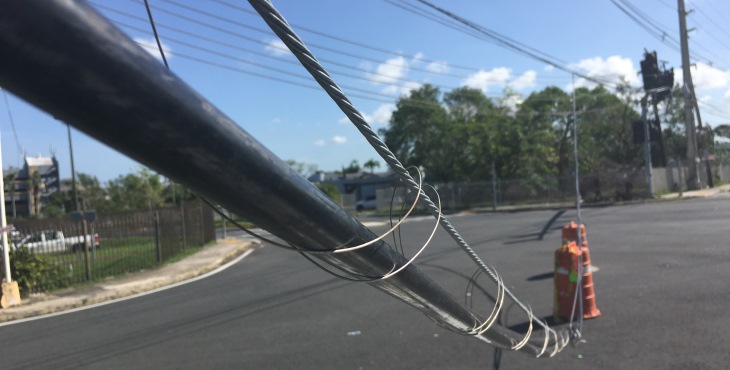 On almost any morning, a routine walk from Puerto Rico’s San Juan VA Medical Center to the American Red Cross and back takes about 14-minutes to cover the 3,030-foot round trip.

However, shortly after midnight on Sept. 20 was no ordinary morning as Hurricane Maria’s 155-mph winds and rain were lashing the island.  In just a few hours, someone would need to make an extraordinary journey to the Red Cross through Hurricane Maria’s most dangerous conditions to fetch platelets or a Veteran would die.

It all started around midnight. The wife of an 83-year-old Veteran brought her husband to the San Juan VA’s emergency department after he collapsed at home. They eventually determined his liver was bleeding.VA had blood on hand to stabilize him, but something was out of sorts.

“We were giving him blood but he was still bleeding,” said Dr. Luis Serrano, the attending physician. The staff later determined the patient had taken too much blood thinning medication. While the transfused blood helped the patient initially, the effects were temporary.

“When his blood pressure went back down, it confirmed my worst thoughts – that he was still bleeding,” Serrano said. “I talked with the surgery team and they said we could stabilize him here, but they needed platelets.”

Serrano called Assistant Chief of Health Administration Eric Bermudez. Bermudez discovered quickly none of the ambulance services were available and a decision was made to use a local vehicle, but roads were impassable. Time was running out.

“I said, ‘Guys, we have to do something very drastic. So, grab some flashlights, radios, and reflective clothing and let’s go,’” Bermudez said.  “We never imagined at the time how bad the conditions were. We knew it was raining and the wind was blowing hard, but we had no idea how bad the roads were.”

Bermudez knew the route. He told Geovanni and Ezequiel, who are also Veterans, to flank him with flashlights while he walked the path. Save what popped into the lights they waved to show their way, Bermudez and Geovanni saw little.

“We knew there was a lot of stuff hanging over our heads. We just didn’t know what it was,” Bermudez said, also remembering a still-running car left in the middle of the road. “We walked very slowly.”

Their destination reached, they started looking for a way in to the building and hoped someone would be there to help them.

“Every single door was locked. We eventually found –and I guess it was a miracle or something –a door that was opened slightly by the wind,” Bermudez said.

Geovanni squeezed through the sliver of a door opening and inside, splashing into four inches of standing water. He waved his flashlight, seeing a stew of furniture, office effects and more, but no people.

While his partners walked around the outside of the facility to find another entrance, Geovanni trudged to the basement where he found two employees. He called his partners on the radio and led them to a basement door.

The trio and the Red Cross employees completed the necessary paperwork for the five life-saving bags of platelets. Bermudez hefted the big box and his coworkers lit the way.

“We just had our heads down and were trying to make it there unharmed,” Bermudez said.

All-in-all, the round trip only took about 30 minutes.  The platelets did their work and soon after, VA doctors performed the surgery on site and the Veteran “walked home” to Isla Verde, according to Serrano.

Serrano said the entire emergency department team shared in the joy of saving the Veteran’s life.

“Their actions and the actions of the entire emergency department that night were heroic. The walk to get the platelets was a big part, but it took the entire team to save his life.”

Bermudez, a 34-year Army Veteran with deployments to Afghanistan and Iraq, said this experience was unlike any other in his life. He noted the bravery of his fellow VA employees in the face of historical catastrophe.

“Neither of them hesitated to do it. They just said, ‘Let’s do it.’ They didn’t complain about it. They never asked why,” Bermudez said, remembering that early morning walk in mid-September. “It was a time to serve others. That was the bottom line.”

Jason Tudor is a public affairs officer for the Charlie Norwood VA Health Care System. He is currently deployed to Puerto Rico to assist in relief efforts.