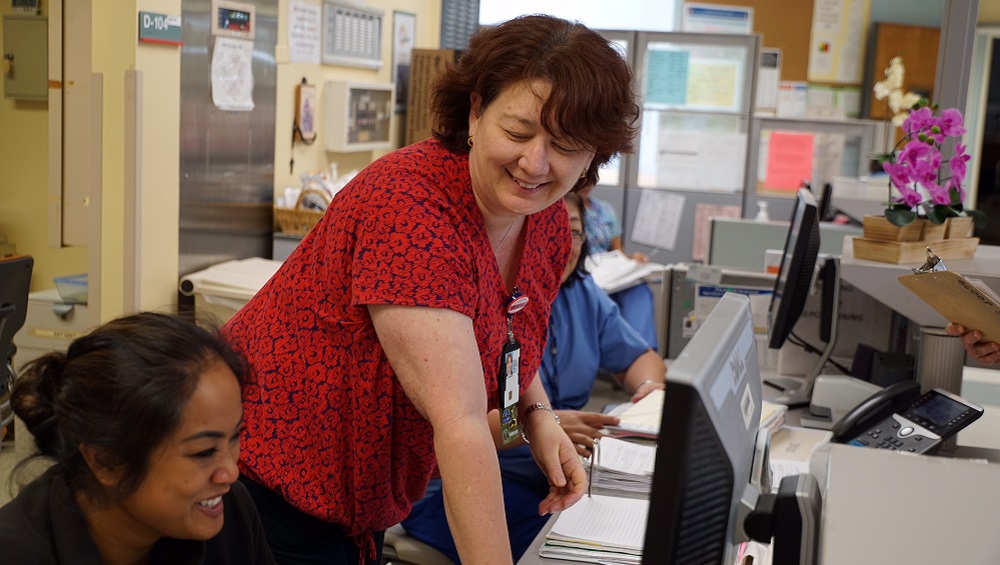 VA Palo Alto nurse Karen Wall, pictured above at work, recently saved a woman’s life on a cross-country flight, applying the CPR techniques she learned and taught in a Basic Life Support class at her health care system.

If you have ever wondered if it is a good idea to learn CPR, here is proof that it works. On August 11, 2017, I was returning home from a conference I had attended in Washington, D.C. During the Southwest flight from Baltimore to Las Vegas, I became involved in a medical emergency on board.

Whenever I travel, I always let the crew know I am a nurse in case anything happens where they need medical assistance. On this particular day, I was sitting in my seat relaxing with my shoes kicked off and talking with my seatmate, when I heard a commotion a couple rows behind me.

I heard the flight attendant say “Nurse!” I turned around, and she saw me and remembered who I was from boarding. She called me over and there was a lady in the window seat of the aisle passed out.

After grabbing my pocket mask from my carry-on (yes, I always have it with me), I went to her seat after the other people in the row cleared out. When I got to her, I tried to arouse her and get her to respond, but she was gray and cold, had vomited, was not breathing, and had no pulse when I checked her carotid artery.

I called a “code blue” and called for someone to get an Automated External Defibrillator (AED) while the flight attendant alerted the pilot so he could call for help on the ground. My seatmate, also a Veteran, jumped into the row as we worked to get the lady lying down in the row across the seats, as we had no other place that was flat enough to lay her out to begin CPR.

As we were doing this, suddenly two more registered nurses and a doctor came from their seats to help. One of the nurses (who also happened to be a VA nurse) began chest compressions (counting out loud) as I gave breaths—it was two-person CPR in action and by the book.

Once the AED arrived and was turned on, I applied the pads as directed by the AED and then plugged it in. The AED analyzed her and gave the shock just like I had recently learned in a Basic Life Support (BLS) class at work. We continued CPR and eventually got a pulse. She was breathing again! We monitored her vital signs, placed her on oxygen, and turned her on her side so she would not aspirate if she vomited again.

The pilot diverted the flight to Denver where we were met by EMT, who then took over the case and got her off the plane to take her to a hospital.

We need to continually practice our skills.

When I think of the many things I learn in class and the skills I not only learn for myself but also teach others as a BLS instructor, this experience reminded me that there is a reason we teach BLS and teach it the way we do. There is a reason for why we need to continually practice our skills and not take for granted it will never happen to us.

We never know when we will be “the one” who makes a difference in a person living or dying. When I had time to think back on the events of this day, it was as if we had taken the book out and literally followed the steps that lead to a positive outcome for real.
Never have I ever felt so proud to be a VA nurse than at the moment that passenger opened her eyes, looked at me, and smiled!