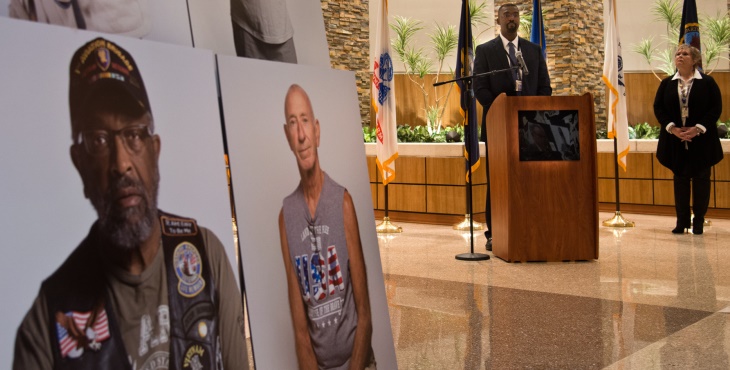 It is said that every picture tells a story, and VA North Texas believes that every Veteran should have the opportunity to share that story.

The VA in Dallas honored its Veteran patients and employees with the unveiling of a portrait project that puts stories and greater meaning behind the many Faces of Service who utilize the system’s health care and services.

U.S. Army Veteran Ron Gray and his service animal, Cujo, have anxiously awaited this unveiling and the chance to see himself displayed at the facility he visits on a weekly basis.

“Cujo and I got early this morning to make sure we could get here on time,” said an emotional Gray, a member of the Cherokee Nation and former airborne infantryman. “It’s just great to see so many of us North Texas Veterans recognized in these portraits. It’s really great.”

What started out as a simple, single-page idea for a quarterly magazine, evolved into a permanent visual snapshot named Faces of Service, representing the mantra of nearly 6,000 VA North Texas employees.

“Every day is Veterans Day at VA North Texas,” said Kendrick Brown, VA North Texas interim director. “The faces, their stories, are what inspires our employees in their daily duties and those who call North Texas, home.”

Capturing imagery and stories of the 4,000 Veterans who use busy VA North Texas facilities each day was a challenging opportunity for the public affairs and medical multimedia offices. A portable photo studio was pieced together and the professional writing, design and photography talents of both offices were leveraged to make Faces more than a simple photo booth opportunity. All work on Faces was in addition to the many regular duties required of teams in VA’s second largest health care system.

For VA North Texas public affairs specialist and program creator, Jeffrey Clapper, Faces of Service was an opportunity to show the faces of true service and sacrifice.

“As a VA employee, I get to see the faces of service and sacrifice every day,” said Clapper. “Our Veterans, their stories, their experiences, are unique, memorable and worthy of remembrance.”

The team captured portraits of 155 Veterans, including several VA employees. A team of photographers led by VA North Texas medical multimedia chief and U.S. Army Veteran Billy Cargile captured the Veterans in a way that exhibited their character and experiences in a single frame.

“It’s important to us as VA employees that our patients and their families see their spouses, sons, daughters, grandparents and friends who devoted a portion of their lives to serving something bigger than themselves, honored and prominently displayed,” said Cargile.

All of portraits will eventually be featured on social media or on display throughout the VA facilities in Dallas and Fort Worth.

About the author: Jessica Jacobsen is a public affairs specialist in Dallas with the VA Office of Public and Intergovernmental Affairs.