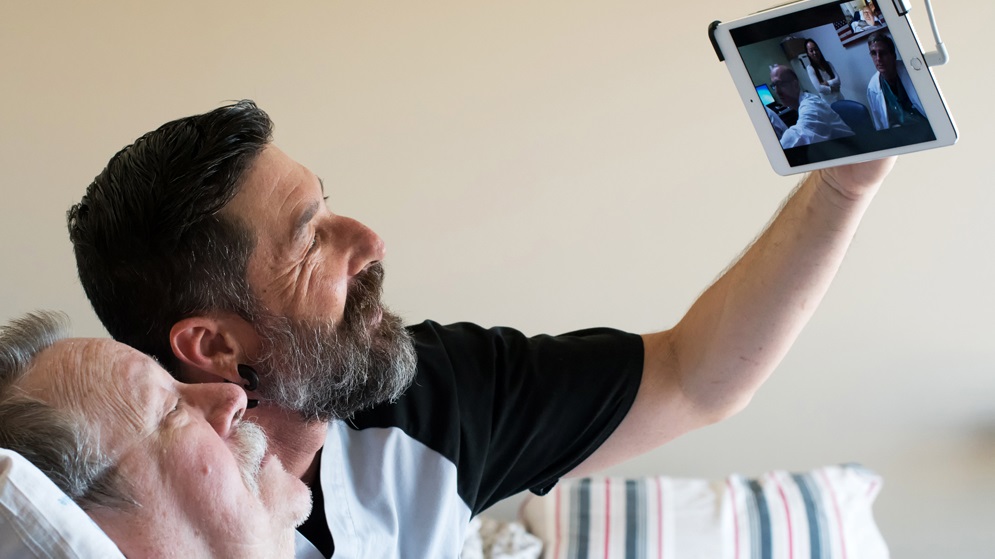 In the U.S., costs for treating chronic non-healing wound care exceed $50 billion per year. It’s roughly prevalent in 2 percent of the general population, including Veterans like Mike Franks.

Mike has mobility issues, so moving in and out of his bed, let alone coming to the San Diego VA Medical Center for an appointment can be a challenge. In his current state, there are two things he credits as a blessing for making his care easier and more effective. One is a nurse that stops by Mike’s residence to check on the progress of his healing. The other is a new computer tablet technology the home health nurse brings with him to easily document the progress of healing.

“It was like night and day. Before, a nurse would treat and dress my wounds but there was no progression in the size of the wounds,” said Franks. “Now, doctors can check the status on a weekly basis with data provided from the tablet. The doctor looks at the information and recommends changes to the type of dressing. I never thought my wounds would heal, but now they’re almost all gone.”

This innovative new tablet is a pilot program that Mike has been using for the last five months to help doctors monitor the effectiveness of the program. It uses built-in digital cameras and 3-D sensors along with computer vision software to capture high-resolution images and then automatically measures the size of a wound.

The information is transferred securely onto a cloud-based electronic repository where it can be viewed remotely by providers to help them with treatment planning. This modality of storing the image and wound data and forwarding it to the provider can augment the use of telehealth to improve Veterans’ access to care. The eventual goal will be to have images go directly into a patient’s electronic medical record file.

When new pictures are taken, wound measurement data from the 3-D modeling software is graphed onto a chart that shows the progression of healing and tells the provider whether the wound is getting bigger or smaller. Based on results, doctors can make changes to the treatment plan.

“The really great thing about this is that in the past, doctors would have to visually estimate whether a wound has improved based on memory of a past image, which can sometimes be confusing when you also have to remember other patient images as well. This tablet provides recorded, accurate data to track progress,” said Dr. Kevin Broder, Project Director for this Wound Image Capture and Storage Innovation.

In addition to wound care, other medical specialties can benefit from this technology. This system could also be used to capture the dimensions of a skin lesion and determine whether it’s increasing in size and needs to be biopsied. By allowing widespread distribution of this to VA health care facilities across the country, it has the potential to save lives through the early detection of cancer.

Technology handles it all automatically

Providers gain several other advantages from using the tablet as well. In the past, nurses would often have to take pictures on digital cameras, organize the pictures with the right patient information and spend time out of the week uploading the right images to the right places. This technology handles it all automatically in an efficient, organized manner. Take the picture, use the modeling software and upload the image onto the cloud avoiding the cumbersome manual work.

The innovation has potential use in all clinical areas of care including home-based primary and nursing care, in clinics, procedure centers or in specialized areas such as dermatology, prosthetics, orthopedics, or podiatry.

If implemented across the VA system, this pilot program has the potential to reduce a patient’s pain and suffering and save millions of dollars through quicker healing and better treatment strategies.

Last is the cost of the tablets. “It’s inexpensive, costing less than $900 per unit,” said Broder. “This is much cheaper than hulking large, expensive telemedicine carts around to do very similar functions but are harder to transport, harder to use to capture wound images and cost many tens of thousands of dollars each.”

VA San Diego Healthcare System officially expanded the pilot program to be used in clinical settings two months ago, and interest has spread to the VA health care systems in Loma Linda, Phoenix and Prescott. If you want to find out more about this innovative pilot, please call Liz Floto at (858) 552-8585 Ext. 5550.