Veteran completes Army career thanks to rehab at Tampa VA 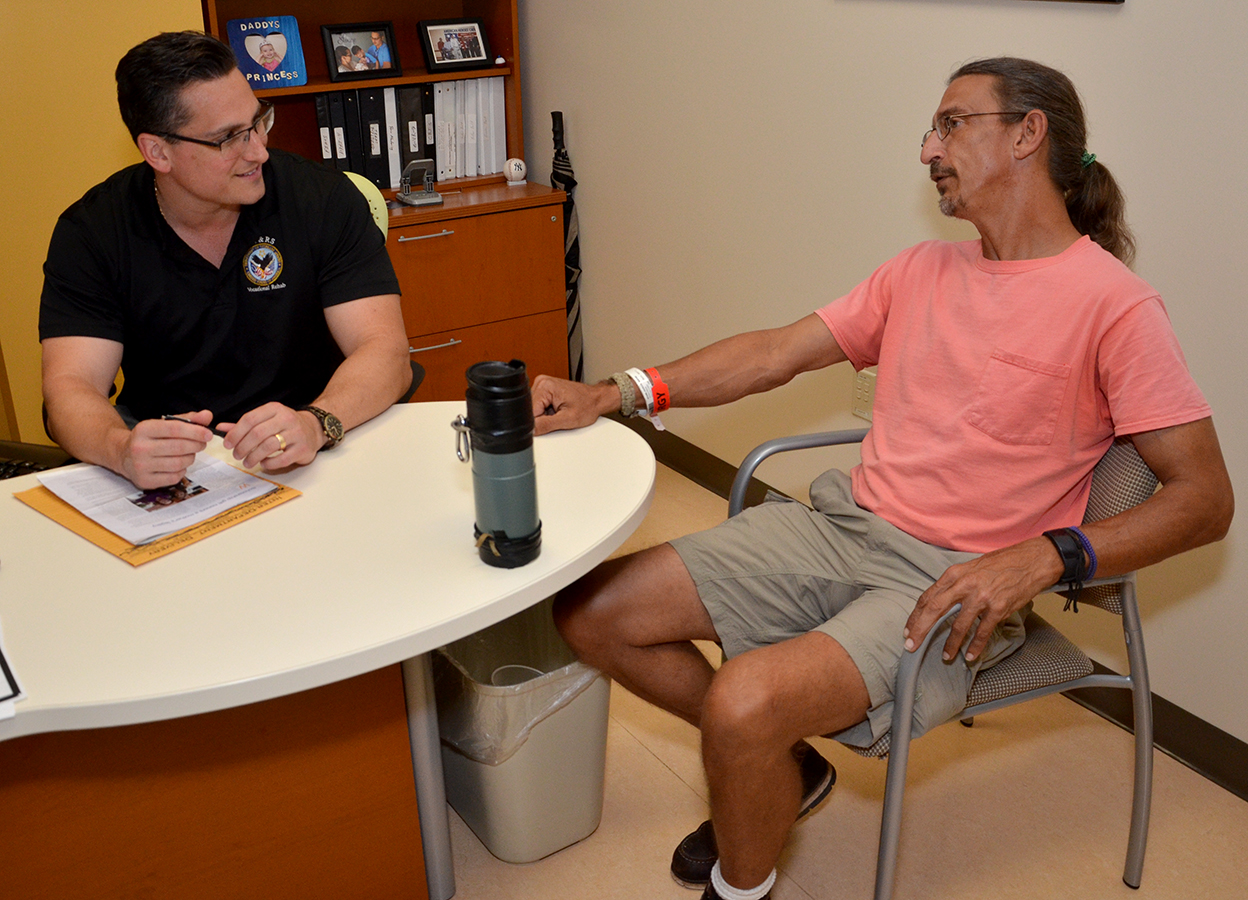 When Patrick Stamm woke up at James A. Haley Veterans’ Hospital, his first thoughts were, “What’s going on?”

He didn’t know it at the time, but he’d suffered major injuries – including a traumatic brain injury – after falling four stories from a hotel balcony in Hawaii on Labor Day Weekend 1996. He’d been celebrating his reenlistment in the Army when the accident happened, and spent the next 40 days in a coma before waking up in Tampa.

While most people would be grateful just waking up at all after a four-story fall, that wasn’t enough for Stamm. With the help of the Tampa’s rehabilitation and therapy programs, the soldier recovered enough that he was able to remain in the Army and complete 16 more years as a military intelligence specialist, including two deployments to Iraq, a stint as an instructor and going back on jump status as a paratrooper, before retiring in 2012.

Stamm was an infantryman and Ranger during his first enlistment, but realized after getting out of the Army that he missed it. He eventually reenlisted and was stationed in Hawaii.

“We were celebrating my being back in the Army and I fell from the fourth floor of the Hale Koa Hotel and Resort,” Stamm said. “I don’t remember exactly what happened, but my fall was broken by the air conditioning unit for the kitchen.  That’s how they found me.  They said something’s wrong with the AC or something, so they went out to check and there I was.”

After waking from his coma, Stamm was told he’d suffered a diffuse axonal brain injury, one of the most common and devastating types of traumatic brain injury. He’d also broken his arm, leg, back, ribs, hip and skull, and ruptured his spleen.  “I was messed up,” he said.

He said his primary motivation through it all was to continue his Army career.

“I ain’t going down like that…I used those words,” Stamm said. “I wasn’t going to put my family through me being unable to care for myself.”

After months of rehabilitation, Stamm was transferred to Brooke Army Medical Center in Texas, where he began his fight to stay on active duty. It took about a year before Stamm got the good news – not only was he going to stay in the Army, but he was going back to Hawaii to finish what he started.

Unfortunately, a hearing problem disqualified him from the infantry career field, but he was offered the chance to retrain into military intelligence.

He spent the rest of his Army career in the intelligence field, including three years as an instructor for the intelligence school at Fort Huachuca, Arizona. He had two combat deployments to Iraq and requalified to become a paratrooper with the 82nd Airborne Division at Fort Bragg, N.C., before retiring in 2012 with 20 years of service.  He is currently living in Louisiana, but recently visited Tampa for an evaluation to see how he has progressed since his rehabilitation.

For Dr. Steven Scott, chief of the hospital’s Physical Medicine and Rehabilitation Service, Stamm is an inspiration.

“He’s a success story as well as beyond anybody’s expectations of his recovery,” Scott said. “He was able to serve our country again despite a serious head injury, and serve at the highest level of capacity.  It exemplifies the ability of the brain to recover, and it’s also a mark of the strength of this individual.”

While Stamm has ended his military career, he’s hoping to continue working for his fellow Veterans. He’d like to open a community for injured and disabled Veterans that is self-sufficient and allows the residents to contribute to their own well-being and also contribute to the community.

“I know I’ve been blessed, and I was fortunate to be able to get back my head and thoughts,” Stamm explained. “Now I want to be able to help other fellow Vets.”