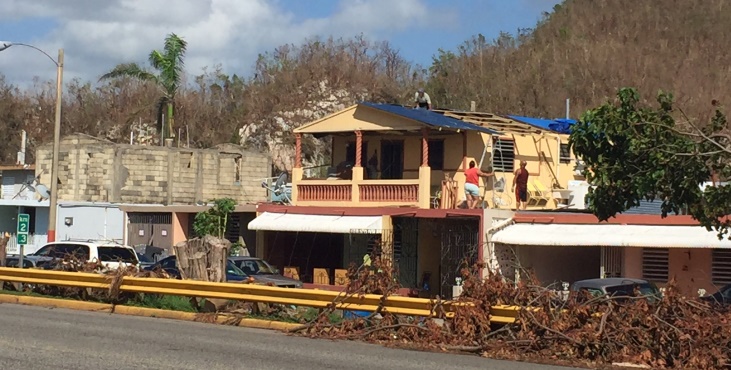 There were 15 Phoenix VA employees in the Disaster Emergency Medical Personal System at the start of the 2017 Atlantic hurricane season; however, a few short months later, the pool of employees ready to volunteer for disaster relief efforts has increased to 137, and counting.

Eric Pieper, an emergency management specialist, said this year has been atypical with the three major hurricanes that have hit the United States adding he’s been fully immersed with the system since August. He said the need for volunteers continues to increase as the situation in Puerto Rico becomes more dire, with substandard living for many on the island still recovering from the devastating Hurricane Maria.

“When we arrived in the San Juan Airport our plane was the only aircraft landing, and there was only one carousel in operation for luggage,” said nurse Majella Vito. “The airport was deserted and dark. It was surreal. The hallways were dimmed, warm and humid. It was apparent the A/C systems were not in full operations, perhaps to conserve power. The passengers (from my plane) were the only people there. There were no ticketing agents, TSA, passengers, patrons or taxis.”

Vito said when they arrived to the VA San Juan Hospital the conditions were even worse than the airport as volunteers slept in frigid conditions on cots in an open bay surrounded by debris and hospital equipment. However, despite the condition, Vito expressed gratitude for the opportunity to volunteer and help VA employees in their time of need.

“Fourteen volunteers have been deployed from here since the hurricane season began,” Pieper said. “The employees here have really stepped up. I haven’t had to promote the program. Generally, what happens in a disaster situation is that people want to help, and DEMPS provides them that opportunity.”

Pieper said it’s important for anyone interested in volunteering to do so for altruistic reasons adding that if an employee thinks they’re going on a vacation they’ll be disappointed. Volunteers live and work in austere conditions with a workday generally consisting of 12 to 17 hour shifts. However, Pieper said that, even though each volunteer had a different experience during their two-week deployment, the volunteers all believed they contributed and provided a positive impact.

“What’s hardest to express is that despite their situation, how hopeful, grateful and generous the people (of Puerto Rico) are,” said Shelli Rayroux, an emergency department registered nurse. “I’ve never worked with more thankful people, who despite losing everything, were still insisting on taking care of us. They brought us food, sang and drummed for us, and brought us all kinds of small treats to say ‘thank you.’”

Of the volunteers from the Phoenix VA, seven deployed from the emergency department. Pieper said the DEMPS program needs any position within the VA, but general patient care personnel were most needed to operate field medical stations such as the Federal Medical Station in Manati, Puerto Rico, and back-filling positions at the San Juan VA Medical Center.

Jack Smith, associate director of the FMS in Manati, said he had “never seen a group of individuals with disparate backgrounds gel so quickly around an ad hoc mission to become a truly integrated team working around the clock to provide exceptional care for a patient population which included people we would not normally see at a VA facility.”

Rayroux said while she was deployed to Puerto Rico they helped 1,350 people; however, she said it was such a small number compared to those who needed assistance.

“I’m thankful to have had the opportunity to help those I could,” Rayroux said. “This was without a doubt the most rewarding two weeks of my 14-year nursing career.”

Pieper said that in addition to the nurses who have deployed to the disaster relief areas the Phoenix VA has sent an electrician and two VA police offers. Matthew Balady, VA police officer, deployed to Texas to help with Hurricane Harvey for a two-week deployment and spent an additional month in Puerto Rico for the Hurricane Maria recovery.

About the author: Macario Mora is a public affairs secialist for the Phoenix VA Health Care System.