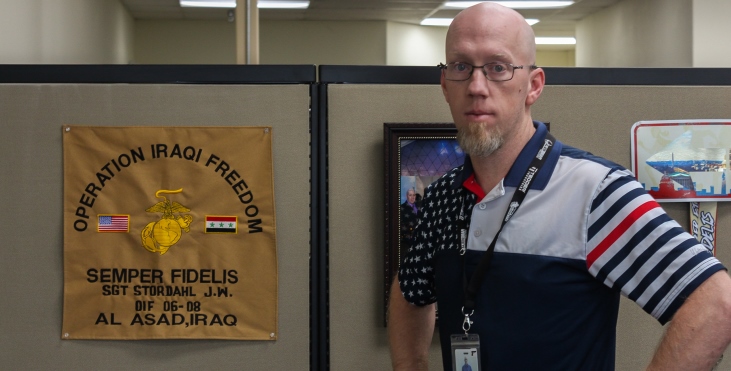 Joseph Stordahl has worn the same wrist band every day since April 24, 2011.

On its chipped metal frame, a name accompanies that date: Joe Jackson.

Jackson was the first marine Stordahl recruited into the U.S. Marine Corps that was killed in action, a fact he lives with and has reluctantly learned to accept, as is the case with what Stordahl saw and experienced during his own active service and deployment in Iraq from 2004 to 2005 in the 8th Communication Battalion and again from 2006 to 2007 in the Combat Logistics Battalion.

Jackson was a hero, Stordahl said.

“The band is a daily reminder of him and the sacrifice he gave for his family and his brothers. If it wasn’t for him, his platoon probably could have been wiped out,” he said. “He was on a patrol. He was clearing mines. One went off, and then he shoved two marines back out of the way before it went off.”

Stordahl said he experienced his own share of combat during his approximately 13 years proudly serving in the U.S. Marine Corps.

Another date, this one branded into memory, lives with Stordahl: Dec. 6, 2006.

Stordahl said he and his brothers and sisters left for a convoy that would make four stops. Three hours in, a middle-of-nowhere highway exploded. The vehicle ahead had hit an IED.

“It’s just deafening. Only thing I remember is bits and pieces,” Stordahl said. “The truck in front of us took the brunt of the blast, our truck mostly got the percussion and shockwave, and we were in an up-armored Humvee and we just got tossed like rag dolls.”

The experience activated the training he and the others had drilled.

“I just remember screams, yells, running to secure the area, running to put tourniquets on Marines, stop wounds bleeding,” Stordahl said. “Next thing you know, we’re getting shot at. Everything just happens — this whole incident happened in less than four hours, but it felt like was 10 days.”

Those four hours affected the next decade of Stordahl’s life, leading him on a slow, painstaking path of physical and mental recovery after a resulting spinal injury caused him to eventually retire from the Marine Corps in 2014.

Despite that, Stordahl said he believes there is a path to healing.

“All you can really do is say, ‘We fought the fight we could. We did everything we could. Because of them, we are here,’ That’s the outlook I have to take on it now,” he said. “None of us died in vain. We all knew the danger when we signed on the dotted line, especially the ones that joined after 9-11. They knew we were going to war. Not a day goes by where I don’t think of those instances, those marines that we lost that day.”

For him, it took four years to start counseling in 2010, which he proudly continues with to this day.

His spinal injury worsened to the point of requiring emergency surgery in 2013.

From 2013 to 2014, he was transferred to and lived within a wounded warrior unit where he was able to heal in the companionship of his brothers and sisters, who each understood the depth of his situation.

After that surgery, his counseling helped him internalize the fact that he had to retire as a Marine. And so he did in August of 2014.

In September of 2014, he was living in Washington state, where he currently resides with his wife and child. He spent time working as a system engineer.

“I was really still learning the transition and trying to get back adjusted to civilian life working with people who were never in the military and had no clue what you’d been through other than you were deployed, yeah, you were hurt in the line of combat,” Stordahl said.

He said he later transitioned as a volunteer for Newby Ginnings of North Idaho Inc., a nonprofit providing aid for rehoused Veterans who were previously homeless.

He said this organization and his time in the wounded warrior unit helped him realize the next critical component to healing for him, which is establishing an empathetic connection to others whether it’s through work, hobbies or light-hearted banter. Because of that empathetic connection, he said they saved his life.

After his time at that nonprofit, he moved to Tedder Industries, which as another component of transitioning to civilian life helped him gain a sense of family akin to the brothers and sisters he gained during the time he devoted to active service.

“You are part of this family now and to me that was huge. That was the biggest part as far as really finally finding my place back in civilian life — was just the people I was working by,” Stordahl said.

He grew to enjoy his time working in the production facilities, and goofing around with the others employed in the Post Falls, Idaho facility making holsters and belts.

“This was a Veteran-friendly community and company, knowing that Thomas Tedder, the CEO, is a Veteran himself, you kind of already have it in your mind that OK, there’s going to be people here that are hopefully going to understand,” Stordahl, who is now a Tedder Industries HR representative, said.

He said he’s found that survivor’s guilt can be combatted through hard work.

“It doesn’t matter what you’ve done, where you’ve been. It’s going to be hard, but you have to keep committed. You need help? Ask for help. There’s resources out there. Utilize them,” he said.

Although Veterans may have trouble transitioning, he said there are organizations that are devoted to helping and honoring Veterans.

“You have to push through. You just need to find something where you’re going to be happy again. You need to find that family-oriented company, whatever it may be,” he said. “Find those resources. Ask the questions. Don’t give up. There’s a light at the end of the tunnel for everyone as long as they put in the effort.”

About the author: Jake Smith is a contributing editor at Alien Gear Holsters and Bigfoot Gun Belts, brands owned and operated by Tedder Industries. He also freelances in the Pacific Northwest as a writer and photographer.