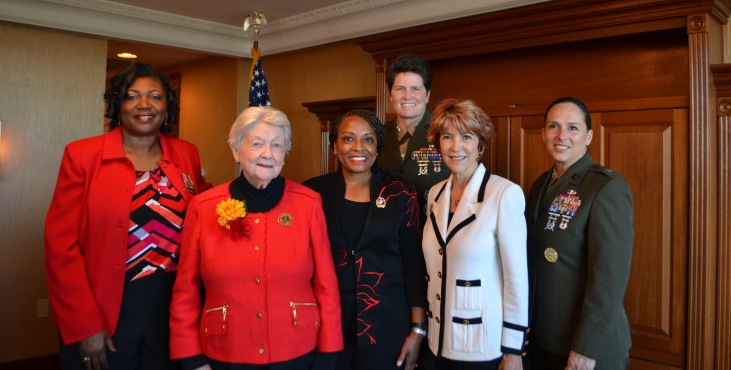 Did you know that November was National Inspirational Role Models Month?  It allows us to reserve time to think of people who have inspired us in life.  As a former Marine, November has special significance for me personally.  Since this month also celebrates the Marine Corps birthday and Veterans Day, I thought it appropriate to share with you some female Marine Corps Veterans who have inspired many over their decades of life. These are some of the first women who entered the Marine Corps during WWII and/or the Korea-Era.

These trailblazing women came from all walks of life and were each personally inspired to make a difference in the lives of others by joining the Marine Corps.  Catherine Louise Frazier was a retired Marine Corps Reserve public information officer whose career spanned from WWII, Korea and Vietnam.  Mary Ann McKenzie served as a secretary in the Office of the Commandant, plans and policies in an electronics subsection, from 1943-1945, an uncommon feat in her time. She rose to the rank of staff sergeant.

Pat Kelly, who enlisted just one year after the creation of the Marine Corps Women’s Reserve, said, “I wanted to do something special and thought I’d join the Navy like my twin brother, Charlie.  Charlie told me to join the Marines because they had better looking uniforms.”

Betty Printz Sims, who was a music teacher at the time inspiration hit her, joined the military when an announcement about the Japanese attacking Pearl Harbor interrupted the music she was listening to on the radio.  “I thought, I can’t stay here and teach music, I’ve got to do something for my country,” Sims said.

Others inspirational women recognized during the event were: WWII Iona Gilbert, and, Korean War Elsie Anderson, Lois Beadling, Donna Genovese, Theresa “Sue” Malone Sousa who enlisted in the Marine Corps Reserve in November 1949.  Sousa is one of the founding members of the WMA, which was created in 1960.  Retired Marines Vivian Butler , the chapter president, and Lelia Jackson chapter treasurer. WMA will be celebrating the centennial of the first woman Marine to enlist in August 2018—which will surely be another inspiring moment.

I’m always inspired to hear the journeys of those who first wore the military uniform and duly inspired by meeting women such as Reynolds and Shea, who are still making history in their active duty leadership positions.