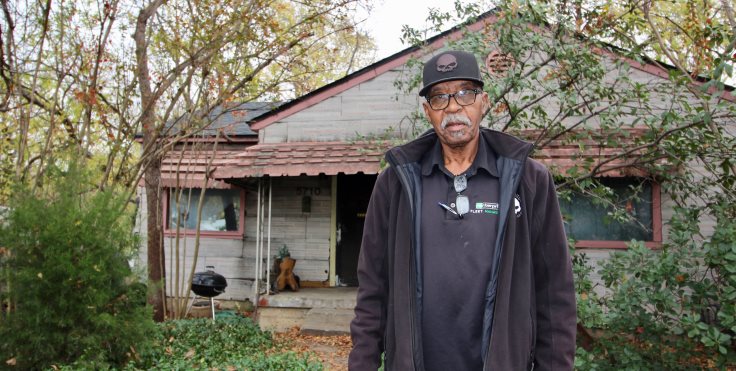 On the coldest day of the year in Dallas, the wind cut a chilly swath through the framework of smoke charred walls belonging to 75-year old VA North Texas patient, Arthur Shelton. These damaged walls once held a 50-year collection of photographs and camera gear cherished by the lifelong Dallas resident and U.S. Army Veteran.

Charred wood and grey skies remind Shelton of his love for black and white photography—every frame the chance to capture reality. The images and equipment may be gone, but the memories remain as reminders of better times for Shelton. It’s these memories that keep him going as he surveys his home after a fire and looks forward to the future with hope—once thought to be lost forever.

Hope can be elusive in the face of reality, but in this case, hope came in the form of VA North Texas and social worker whom he calls his guardian angel.

Arthur Shelton lives a proud life. He left a hard-knock life in Dallas for the U.S. Army, straight out of high school in 1960. Though three years of service at Fort Hood, one memory stands out among the many.

“I remember when President John F. Kennedy came to Fort Hood and inspected the troops,” said Shelton. “That was just incredible to be that close to the president.”

After the military, Shelton returned home to Dallas and used the G.I. Bill to get an advertising degree from what is now the University of North Texas. After owning his own his own business, a hobby of doing home repairs moved him into installing some of the first satellite television dishes in Dallas. After retiring from Verizon, he got a part-time job to stay busy. The fire interrupted what should have been the golden years of retirement and made his long-time home uninhabitable.

One visitor to the fire scene on Vanwinkle Avenue that fateful evening was the American Red Cross. Upon learning that Shelton was a Veteran, they referred him to VA North Texas’ Dallas Medical Center.

Without insurance coverage, due to original asbestos tiles on the exterior of the home, Shelton was left living in his truck while he saved what little money from his fixed income to make repairs.

“I was essentially homeless, sleeping at my daughter’s house when it got too cold,” said Shelton.

Despite his age and disabilities, Shelton started doing work to his home, relying on the work ethic and pride that served him well all his life. But those can only take you so far when it comes to maintaining the hope that you will someday live in your home again.

“When he walked into my office, I knew that he was sincere and a proud individual,” said Casey Perry, VA North Texas social worker. “I wanted to show him that VA had a lot of resources that could help him. He didn’t have to be out there all alone working on his home.”

Perry worked the phones and contacted several community partners hoping to secure some sort of support for Shelton as he rebuilt from the frame of a fire-damaged home. Individuals in the community and organizations stepped up to help Shelton in various ways. Veteran-owned Rowley Construction, Home Depot and a local Disabled American Veterans chapter made items like a new roof, electrical and insulated walls a reality for the humbled Veteran.

“It’s hard for me to accept people doing anything for me,” said Shelton. “Accepting the help was just like realizing many years back that I needed to go to VA for my hearing. I didn’t want to admit I needed help and that I had a handicap.”

VA social work services are an integral part of a Veterans overall health care. Social workers can spend their days in a primary care setting, in mental health, or as a key asset to Veterans, families and caregivers in resolving issues related to housing, finance and physical limitations. Perry never operates with an “or” mentality. It’s the “and” that allows VA social workers to help Veterans realize opportunities and maintain hope for better outcomes in life.

“Casey Perry is my guardian angel. I don’t know what I would have done without her caring and coordination to help me rebuild my home,” said Shelton.

“Social workers in general try to do anything they can for their patients. I feel lucky to be part of his journey, and I’m fortunate to work for an organization like VA that gives me access to so many resources,” said Perry.

Cold December winds sting less when you have a caring community and guardian angel standing with you. Renewed hope brings with it a new reality. Arthur Shelton gets up each morning ready to add frames to his life, both the wood and film variety.

“I can’t wait to get back to my photography, but right now I’ve got things to do thanks to my guardian angel.”