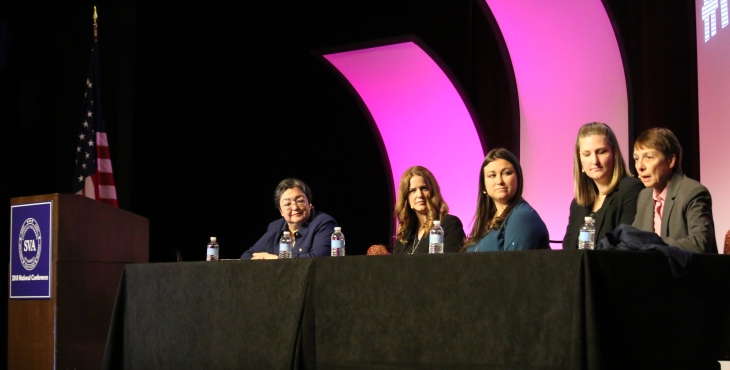 Last week, I had the privilege of attending and presenting at this year’s Student Veterans of America National Convention (NatCon). In a recent survey by Service Women’s Action Network, about a quarter of women reported not feeling welcome in service member and Veteran organizations – an anecdote I’ve heard elsewhere – so I was particularly interested in participating in this conference as a woman Veteran.

Would women Veterans be invisible or unrecognized?

Not at all, I’m very pleased to report. Women Veterans were front and center on the website, in programming and on the main stage. SVA’s director of policy, Lauren Augustine, told me, “women Veterans account for 48 percent of SVA chapter leaders and are over represented in higher education, with 20 percent using the GI Bill compared to their counterparts currently serving, which sits at 16 percent on active duty.

To honor that, SVA made sure that women were a part of the national conference, with breakout groups and a panel highlighting Catherine Verhoff, chief diversity officer at PGIM (global investment management businesses of Prudential Financial) – additionally, five of the 10 finalists for student Veteran of the year were women.

This was not by chance, Lauren reported: “One of the reasons women were featured prominently during the 2018 NatCon was due to feedback received from the 2017 NatCon requesting additional programming for women.”

I had the chance to chat with many women student Veterans and their supporters throughout the conference, and all reported feeling welcome and supported by SVA staff and their fellow attendees.

Some best practices I observed that other organizations may consider when planning large events:

“It has been made more than clear that women are valued and empowered at SVA,” both on staff and as students, Lauren told me about coming on board the team there recently, “It’s been great.”

To ensure success when planning an event, she specified, “Women Veterans shouldn’t be an afterthought” – those responsible should keep them in focus from the start. Lauren also encouraged student Veterans to check out other programs available for them through SVA, including the Leadership Institute, VFW-SVA Legislative Fellowship, and more – all of which have strong participation by women Veterans.

And we both hope to see you at SVA NatCon 2019 in Orlando, Florida.