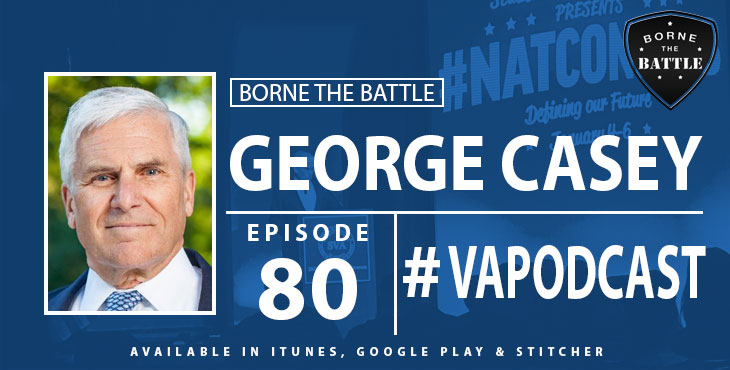 The past couple months have been amazing with so many great Veterans agreeing to be featured and doing interviews. Sometimes, when I get a stash of interviews recorded, I forget how good some of them are until I go back to edit them. That’s the case with my interview with General George Casey (ret). We recorded the interview at Student Veterans of America’s #NatCon2018 during a busy day of interviews with Student Veteran of the Year finalist interviews, and I was pleasantly surprised when I listened to the interview a couple weeks later.

General George W. Casey, Jr. is one of the most accomplished soldiers in U.S. history and an authority on strategic leadership. As the 36th Chief of Staff of the U.S. Army from April 2007 to 2011, General Casey led what is arguably the world’s largest and most complex organization — 1.1 million people strong, with a $200+ billion annual budget — during one of the most extraordinary periods in military and global political history. He is widely credited with restoring balance to the war-weary U.S. Army, modernizing and leading the transformation necessary to defend our nation in the 21st Century, and ensuring the current force deployed in the war on terror was the best this country has ever fielded.

Currently serving as a Distinguished Senior Lecturer of Leadership at the Samuel Johnson Graduate School of Management at Cornell University and lecturing internationally on leadership to the leaders of national and multinational corporations (e.g., Coca-Cola, Caterpillar, Amazon, TDAmeritrade and General Electric) and at other business schools (e.g., Columbia, Yale and the Universities of Denver and North Carolina). He is also Chairman of USO Board of Governors and serving on Georgetown Board of Directors.

George tells us about his 41 years in the Army, why he joined, his close friends in the service and his continued service to Veterans and students.