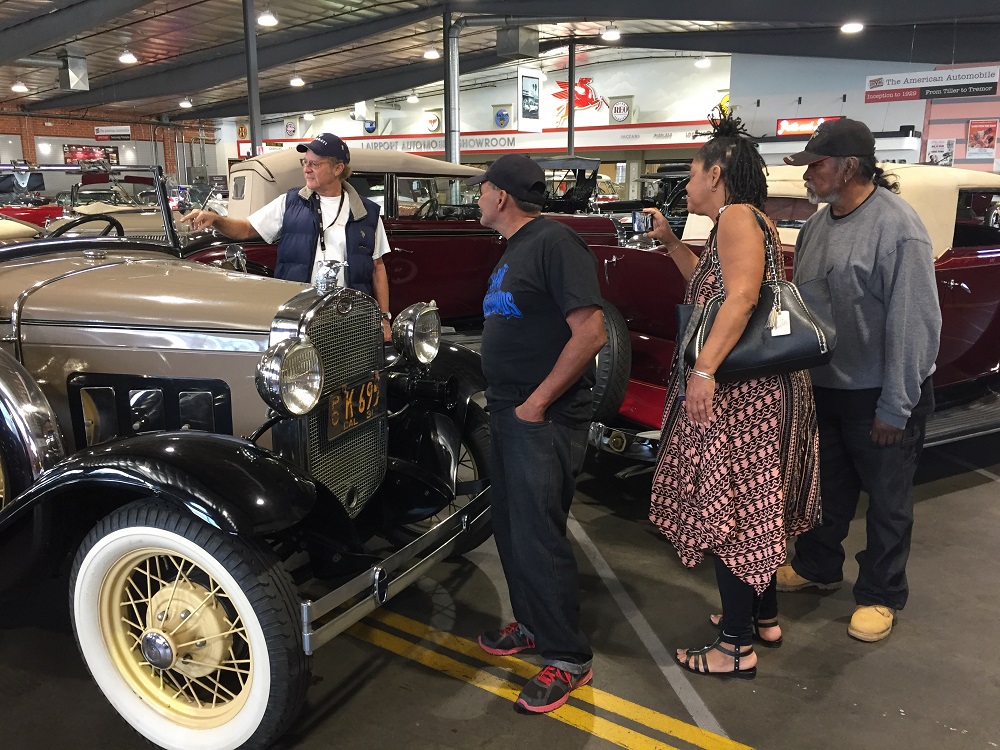 The scent of rubber tires, car engines and used motor oil fills the air; no matter what direction you turn, the smells are inescapable. Not a great way to start your day for some folks, but, for a group of Los Angeles Veterans visiting the Automobile Driving Museum in El Segundo, California, the aromas remind them of days when automobiles were a symbol of freedom and helped define their generation.

“I like the old cruising cars like the sixties, that’s my era,” said Army Veteran Jesus Cobos. “It was a good ride, cruising around. Brings back memories of different times.”

The museum has a collection of 140 cars of which 50-60 are on display at any one time. Most of the cars are American made, dating back to the late 1890s through the 1980s. Veterans from the VA Greater Los Angeles Healthcare System were treated to such classics as Ford’s Model-T, American Bantam Deluxe Roadster and a 1936 Lincoln Town Car. Docents encouraged Veterans to sit inside cars, look under the hoods and tinker with the old-style door knobs, seat belts and steering wheels.

According to museum’s Executive Director Tara Hitzig, this tactile approach for a car museum offers a unique encounter for guests.

“I think it’s important that we give back to the people who gave to us.”

“A lot of museums you go to you’re not allowed to touch the cars or get in them. They get to have a different experience when they come here and actually feel the cars and be a part of it.”

The museum, in collaboration with VAGLAHS, developed the Ride for Warrior Program last year to bring Veterans to the exhibition hall. The idea of pairing cars with Veterans originated from the museum docents, many of whom are Veterans.  They understood how Veterans connected with cars especially those who worked on trucks, jeeps, and airplanes while serving in the military. Bringing their fellow Veterans to the museum and spending time with them was a nice way of giving back.

“It’s payback,” said museum docent Joe Plowden. “You know guys I served with, I just like to share this experience with them, it’s just fun.”

One of the museum highlights included a visit to a “time machine.” Thanks to the blockbuster movie, ‘Back to the Future’, the 1980’s DeLorean model is the most popular display at the museum. Veterans were visibly excited to take their turn in the driver’s seat despite the missing “Flux Capacitator.”

After the tour, Veterans were chauffeured around local streets in a classic 1960 Pontiac Bonneville and 1947 Chrysler Windsor convertible. Their eye-popping rides made them instant celebrities with onlookers.

“I’m rich and famous just for the moment,” exclaimed Air Force Veteran Betty Love while cruising around in the convertible. “This is really, really nice, I must say. I’m totally stoked about this because I didn’t know what I was anticipating or what was going to happen.”

Love, along with the other Veterans on the tour, experienced homelessness following their military service but now live in permanent and supportive housing on the VA West Los Angeles Medical Center. For Love, the tour and docents exceeded expectations.

“I really enjoyed looking at vintage cars and how they were made. This was nice, especially the tour guides. They were informative, very knowledgeable and I liked that.”

Plowden and fellow Veteran and museum docent Mark Seigle, rounded out the tour with lunch at a local eatery, compliments of the Automobile Driving Museum. The museum strives to be community oriented explains Hitzig. She hopes Veterans and guests walk away with a sense of happiness while learning something new.

“I think it’s important that we give back to the people who gave to us,” said Hitzig. “There’s this major historical impact on the automobile industry and Veterans played a role.”

“This has been the most enjoyable time I’ve had in a while,” said Love.