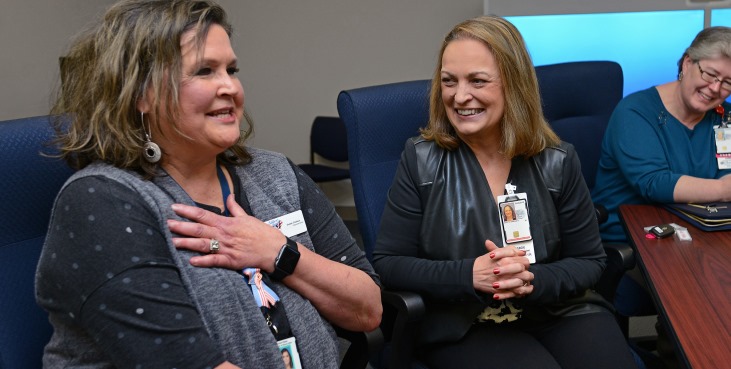 Susan Cookus’ unbridled dedication to Veterans and their needs has earned her a great deal of appreciation and respect over the many years she has volunteered at Central Arkansas Veterans Health Care System. This year, she has been recognized nationally as one of the best.

The National Advisory Committee for VA’s Voluntary Services named Cookus as the National Female Volunteer of the Year after reviewing nomination letters from staff and Veterans. Cookus is a member of Soldiers’ Angels, a Texas-based non-profit that provides aid and comfort to the men and women of the U.S. armed services, their families and a growing Veteran population.

According to Central Arkansas Voluntary Services chief Michael Dobbs, Cookus has volunteered more than 570 hours and helped to distribute more than $720,000 in donations in the past year on behalf of Soldiers’ Angels. She and other volunteers can often be found at the bedsides of hospitalized Veterans thanking them for their service and providing gifts in appreciation.

“Her dependability is off the charts,” said Dobbs. “We are extremely proud of Susan and look forward to her representing the Central Arkansas Veterans Health Care System at the annual NAC conference in Tampa where she will receive the award.”

“Susan is making a tremendous impact on Veterans’ lives and we appreciate her and the volunteers across the VA,” said Amy Palmer, Soldiers’ Angels CEO. “No one can determine a volunteer’s impact simply by the number of hours contributed, but by the results of her efforts on thousands of Veterans’ lives.”

The National Advisory Committee was established in 1947 and became a federally-chartered advisory committee in 1975. The NAC advises the under secretary for health on matters pertaining to the participation of volunteers in VA medical facilities, assists in recruitment and orientation of volunteers, and keeps the officers and members of participating organizations informed of volunteer needs and accomplishments.

“Susan is amazing representative of all of the wonderful volunteers at CAVHS,” said Dr. Margie Scott, medical center director. “We’re very proud of her and excited about her award.  Volunteers like Susan are essential to providing the very best care and compassion to our Veterans.”

Jessica Jacobsen is a public affairs specialist in Dallas with the VA Office of Public and Intergovernmental Affairs.