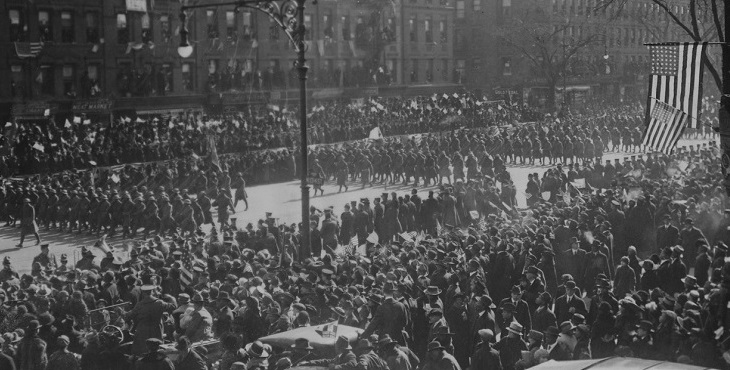 Pvt. William Kirlew was an immigrant from Jamaica who served in the Army during both World War I and World War II.  He arrived in America just two years before the outbreak of World War I in Europe. When the United States joined the war in 1917, Kirlew showed his eagerness to serve.  Even though he was not yet an American citizen and he was too young to register for the draft, he did anyway.

William Kirlew’s Draft Registration Card. He registered his birth year to make him two years older than he actually was to meet the age requirement.

Kirlew discharged from the Army and moved to Harlem, New York where he witnessed the Harlem Renaissance.  During this time, many African-American artists created new images and ideas through music, literature, and art to redefine what it meant to be an African-American. Kirlew remained in Harlem and gained his American citizenship in May 1933.  During World War II, Kirlew re-enlisted in the Army for a brief time at the age of 44.

On July 3, 1991 Kirlew passed away at the age of 92. He is buried at Florida National Cemetery in Bushnell, Florida. In partnership with the Veterans Legacy Program, students and faculty at University of Central Florida conducted research on over 100 Veterans buried at Florida National Cemetery, including Kirlew. Their biographies are now shared with the public, and provide a unique perspective on American history.

In honor of Black History Month, please join us in recognizing the Veterans Legacy of William Kirlew, and read his full biography here: