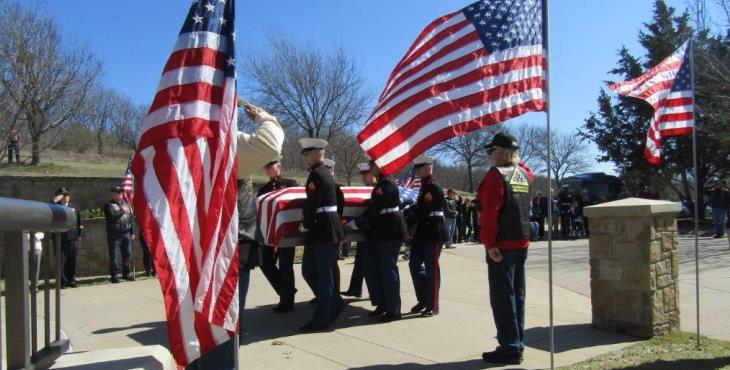 On March 2, a WWII Marine Veteran’s remains were  laid to rest at Dallas- Fort Worth National Cemetery.  Pfc. Arnold Harrison, a Detroit teenager who went missing in action in 1943 during the Battle of Tarawa, is finally home, near his family.

His remains had been interred at a battle site in the Gilbert Islands and moved during remain recovery operations between 1946 – 1947. At that time his remains were not identified and were reinterred at the National Memorial Cemetery of the Pacific (known as the Punchbowl) in Honolulu.

On Jan. 30, 2017, the body was disinterred by the Defense POW/MIA Accounting Agency which then submitted the remains for analysis. They were then identified as Pfc. Arnold Harrison and returned to his family for final interment at Dallas – Fort Worth National Cemetery.

Harrison was 19 years old at the time of his death. In November 1943, he was assigned to Company B, 1st Battalion, 2nd Marine Regiment, 2nd Marine Division, which landed against stiff Japanese resistance on the small island of Betio in the Tarawa Atoll of the Gilbert Islands.

Over several days of intense fighting at Tarawa, approximately 1,000 Marines and sailors were killed and more than 2,000 were wounded, but the Japanese were virtually annihilated. Harrison died on the first day of the battle, Nov. 20, 1943.

“We were able to honor Pfc. Harrison for his brave battle and lay him to rest close to his family,” said Dallas-Fort Worth National Cemetery director Larry Williams. “As a former Marine myself, this gives me great honor to know such a young and brave Marine will be placed here amongst his fellow comrades.”

The service, attended by approximately 200 people, was touching according to Juanita Hargrove, an administrative officer for Dallas-Fort Worth National Cemetery.  His family read a letter written in 1943 by his mother about how deeply the loss of losing her only son affected her.  “I was very moved by her words and the fact that at this moment in time those words are now connecting with her child,” said Hargrove.

Jessica Jacobsen is a public affairs specialist in Dallas with the VA Office of Public and Intergovernmental Affairs.