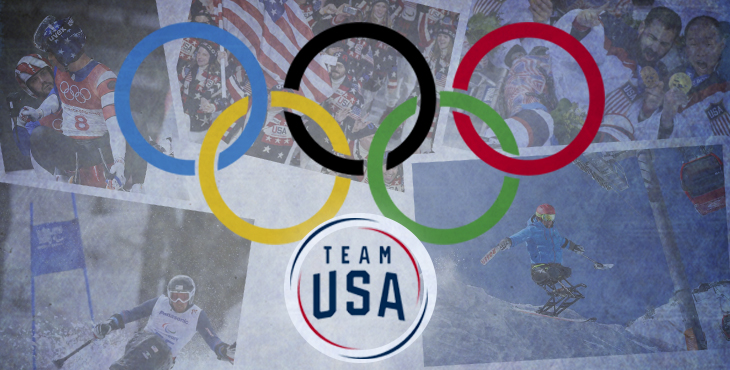 The 2018 Paralympic Winter Games begin March 9 in PyeongChang, South Korea. There are 18 Veterans among the 74 athletes representing Team USA at the Games, including eight Marines, seven Army Veterans, two Navy and one Air Force Veteran. VA supports many of them through the Veterans Monthly Assistance Allowance, which provides a monthly stipend for disabled Veterans training in Paralympic sports. Many of these Veterans have participated in VA’s national rehabilitation events managed by the Office of National Veterans Sports Programs and Special Events.

Best of luck to all of Team USA and thank you to our Veterans for their continued service. Coverage of the 2018 Paralympic Winter Games begins March 9. Check here for a listing of TV and streaming options and the complete schedule of coverage.

Kirk Black served in the Army from 1988 to 1993. In 2014, he had a chance meeting at VA’s Winter Sports Clinic with a national curling coach, who invited him to a training camp in Lake Placid, New York. Unfortunately, at the time, there were no local curling clubs in his home state of Texas, so Black made the decision to move his family from San Antonio to Madison, Wisconsin, for six months each of year to train.

Steve Emt spent two years at the United States Military Academy where he played soccer and basketball. He later graduated from the University of Connecticut as a walk-on basketball player from 1992 to 1994. Emt was in a car accident which paralyzed him from the waist down in 1995. In the summer of 2014, he was approached by a curling coach and has been on the ice ever since.

Ralph DeQuebec was injured by an IED while serving in Afghanistan in 2012. This resulted in bilateral above the knee amputations for the Marine Corps soldier. He is the recipient of a Purple Heart.

Travis Dodson, a Marine, was struck by a grenade tossed into his room where he was staying in Iraq in February 2007. He lost his left leg and the hip and right leg below the knee. For his service, Dodson received a Purple Heart. While a student at University of Illinois Urbana-Champaign, he became involved with several adaptive sports, including sled hockey. He competed in Nordic skiing at the Sochi 2014 Paralympic Winter Games.

Jen Lee currently serves on active duty and is a member of the Army World Class Athlete Program. In 2009, his left leg was amputated above the knee after a motorcycle accident. He was introduced to sled hockey by “Operation Comfort,” an organization dedicated to assisting injured U.S. service personnel at the Brooke Army Medical Center in San Antonio, Texas.

Luke McDermott was injured by an IED while on patrol in Afghanistan in June 2010 with the 1st Battalion 6th Marines. He began his sled hockey career while being rehabilitated at the Center for the Intrepid when his physical therapist asked if he would be interested in playing. He made his U.S. national  team debut in 2015.

While serving in Afghanistan with the 1st Battalion 5th Marines, Josh Misiewicz was injured by an IED resulting in a double above-knee amputation. He was introduced to sled hockey by a friend that plays for the USA Warriors Sled Hockey Team and ended up making the team, playing three seasons with the Warriors.

Rico Roman retired following an injury by an IED while serving his third tour in Iraq in February 2007. His left leg was amputated above the knee. For his service, he was awarded a Purple Heart. He was introduced to sled hockey in 2008 by Operation Comfort at the Brooke Army Medical Center in San Antonio, Texas.

Dan Cnossen graduated from the Naval Academy in 2002 and served until 2009. While platoon commander for SEAL Team One in Afghanistan, he stepped on an IED and lost both of his legs above the knee. Dan rehabilitated at Bethesda National Naval Medical Center and later at Walter Reed National Military Center where he learned to walk again with prosthetic legs.

Sean Halstead was injured after falling 40 feet out of a helicopter during an Air Force search and rescue training exercise in 1998. In 2001, he attended VA’s Winter Sports Clinic where he fell in love with Nordic skiing thanks to the Seattle VA Medical Center staff who encouraged him to continue his passion for sports.

Bryan Price served in the Army from 2000 to 2006. He was selected to be on the 2014 Paralympic team without previously competing on the U.S. Paralympic Nordic Skiing national team.

After the 9/11 terrorist attacks, Andy Soule wanted to give back to his country and joined the Army. While in Afghanistan an IED detonated next to his humvee which resulted in a double leg amputation. He quickly caught onto skiing with no previous experience after attending a cross-country recruitment camp in 2005.

Jeremy Wagner joined the Army Reserves in 2000. He returned from a deployment to Iraq in 2007 and was left paralyzed from the waist down as a result of a motorcycle accident. The Palo Alto VA Medical Center’s Spinal Cord Injury Center is where he received treatment. Jeremy began his skiing career with Alpine Skiing in 2010 at the VA National Veterans Wheelchair Games.

Josh Elliot joined the Marine Corps in 2002 as a combat engineer. He stepped on an improvised explosive device in 2011 on a routine patrol in Afghanistan. This incident resulted in both of his legs being amputated and losing three fingers. He recovered at Walter Reed and the Navy Medical in San Diego. Josh started monoskiing with Disabled Sports USA, which helps wounded warriors and people with disabilities participate in adaptive sports, in December 2011.

Kevin Burton served in the Navy from 2002 until 2011. He medically retired three years after being diagnosed with a degenerative eye disease, retinitis pigmentosa. In 2014, he competed in Nordic Skiing in the Winter Paralympics. Kevin credits the U.S. Association of Blind Athletes, VA and Ignite Adaptive Sports at Eldora for supporting him in the beginning and as his skiing career progressed.

Brandon Powell-Ashby served in the Marine Corps and will be assisting Kevin Burton as his skiing guide.

Jimmy Sides served as an explosive ordnance disposal technician in the Marine Corps. He was trying to disarm an IED in Afghanistan when it exploded. This resulted in losing sight in his left eye and the amputation of his lower right arm.

Michael Spivey served in the Marine Corps as a combat engineer and deployed to Iraq and Afghanistan in 2007 and 2010. While in Afghanistan in December 2010, he was injured by an IED. Michael did his rehabilitation at Naval Medical Center San Diego, where he was encouraged to participate in sports as part of his recovery. He began snowboarding in 2014.

VAntage Point author Mei-Mei Chun-Moy also contributed to this story. She is a sophomore majoring in history and public Policy and serves as a senior editor for her school’s academic and literary journal. She is currently an intern at the U.S. Department of Veteran Affairs.