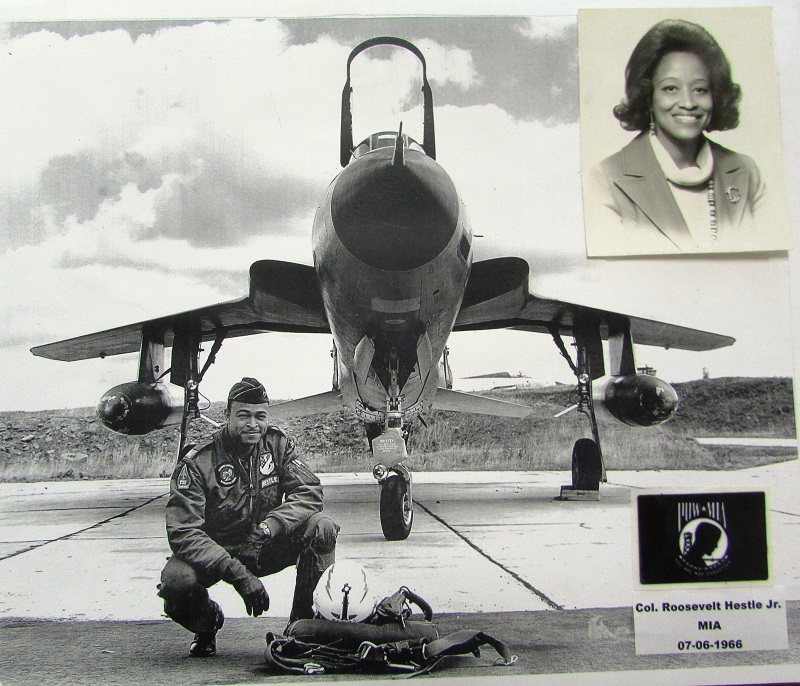 Corda Hestle was only 12 years old when her father’s F-105 Thunderchief was shot down while leading a strike mission against surface-to-air missiles sites in North Vietnam. Nearly 52 years after Col. Roosevelt Hestle, Jr., was declared missing in action (MIA), the fighter pilot will receive a hero’s burial at Arlington National Cemetery April 13.

When Corda’s colleagues at VA learned of her father’s story, she was flooded with emails. “I’m overwhelmed with the warmth of their responses,” said Hestle, who has devoted more than 20 years of her career serving Veterans at VA. “Many of my friends will be coming to Arlington at their own expense for the ceremonies.”

When Air Force officials visited her home in 1966 to notify her family of the gut-wrenching news, Hestle recalls not initially understanding the gravity of the situation. But that quickly changed when she saw her mother and older sister break down in tears. “It really frightened me,” she said.

According to official accounts, as the pilots approached their target, a missile launch warning was issued by then Maj. Hestle, alerting the aircraft to take evasive action. As they neared the town of Thai Nguyen, the pilots encountered anti-aircraft fire. During evasive maneuvers, the other pilots lost sight of Hestle’s plane. Though no one saw the crash, crews aboard one aircraft confirmed seeing a large ball of fire and black smoke rising from the ground. Attempts to contact Hestle were unsuccessful and no parachutes or distress signals were seen or heard. Additionally, hostile conditions of the crash site made search and rescue efforts impossible.

After years of extensive research, interviews, investigations and excavations – a small amount of Hestle’s remains were identified on Dec. 7, 2016. On April 17, 2017, DNA analysis of the remains by the Defense POW/MIA Accounting Agency Laboratory confirmed the finding.

A wife and daughter’s call to action

The tragic event of 1966 compelled Constance Hestle, Corda’s mother, to play an active role in the international efforts to find and rescue service members who were deemed MIA or prisoners of war (POW). Constance, who passed away on Nov. 5, 2017, was one of the four women who encouraged the development and distribution of POW/MIA bracelets – worn to honor and increase awareness of POW/MIA service members.

“My mother, along with Mary Ann Means, Carol Hanson and Patricia Hardy, visited eight world capitals to help publicize the plight of MIA/POW service members and their families,” Hestle said. “They pleaded for information about their missing husbands.”

Throughout the years, her mother’s agonizing wait for her father’s return were punctuated by reports of former POWs claiming to have seen Hestle in camp, news footage believed to have shown him in captivity, and reports from South Vietnamese refugees claiming that numerous Americans were still kept prisoners in North Vietnam.

“My sincere interest in serving Veterans grew out of my mother’s dedicated and vigorous efforts to find my father,” said Hestle, who works as a Veterans service representative. “Each time I hear a Veteran, I say thank you for being here for me, it’s moving and meaningful on a personal level. I shake their hands and I thank them for being here for me and my parents. My gratitude for their service is heartfelt.”

About the author: Tom Morley is a public affairs officer with the Veterans Benefits Administation’s Waco regional office.