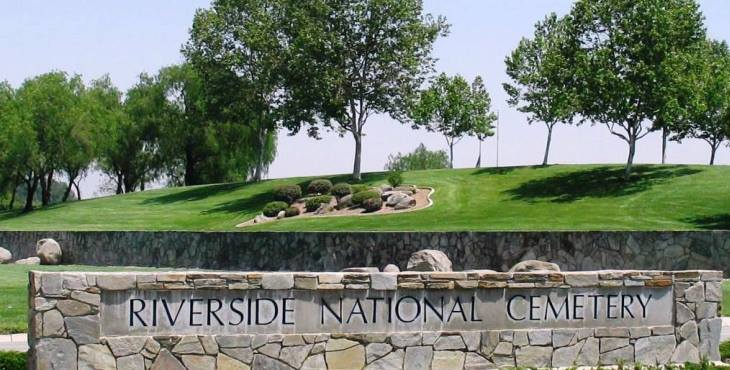 There’s a blue flag on a hill near the entrance to Riverside National Cemetery. It marks the final resting place of Ysmael “Smiley” Villegas, a World War II soldier who was killed in the Philippines in 1945, just one day shy of his 21st birthday.

“Villegas went from foxhole to foxhole until he was killed by enemy fire, and it caused his whole troop to have the courage to go forward in battle,” said Allison Hedge Coke, a distinguished professor of creative writing at the University of California, Riverside.

Yet in spite of his receipt of the Medal of Honor, upon Villegas’ return to his hometown of Riverside, the Latino soldier was buried in a segregated cemetery. He was honored and reinterred at Riverside National Cemetery after the site’s dedication in 1978, and “as a result, a Latino was the first person buried there,” according to Hedge Coke.

As the final resting place for nearly 300,000 former military personnel and their family members, the cemetery is a trove of stories like Villegas’. But many of those stories have gone untold — until now.

Supported by a grant from the VA’s National Cemetery Administration, Hedge Coke along with a small group of faculty and students are launching a sweeping initiative that encourages K-12 students to document the histories of Veterans interred at Riverside National Cemetery.

The cemetery is the third largest in the national system of 135 total sites based on acreage alone; since 2000, it has also been recognized as the system’s most active interment site based on sheer number of burials. In 2016, the site was announced as one of the pilot locations for the VA’s Veterans Legacy Program, designed to memorialize the service of Veterans interred in VA national cemeteries through public educational programming.

“We’re both thrilled and honored to have been selected for this project,” said Milagros Peña, dean of college of humanities, arts, and social sciences. “It’s truly the type of research partnership that engages broader community interests with UCR.”

Beginning this spring, Hedge Coke, the project’s designer and proposal author, and her team will collaborate with students and teachers from Riverside Unified School District and other nearby districts to encourage K-12 students to conduct archival research, personally interview the families and loved ones of those interred at the cemetery and write and produce stories of their lives.

As products of the K-12 students’ research, the project, titled “Along the Chaparral: Remembering the Enshrined,” will result in a series of creative tributes to the interred. The students’ findings will be published in an anthology, featured in two series of documentary-style vignettes and used to populate an interactive digital map of the cemetery that will also include information about the site’s symbolic landscaping and memorial monuments.

“What we’re putting into place will tie the community together in a way that has a lasting effect,” said Hedge Coke. “It’ll also help memorialize the interred. A lot of people believe all the Veterans buried at Riverside National Cemetery were killed in battle, but that’s not the case. There are all kinds of people interred there and all kinds of stories.”

The project is an especially personal one for Hedge Coke, whose father served in World War II. In particular, she looks forward to exploring the rich cultural diversity of Riverside National Cemetery and its people.

“These Veterans’ stories tell us so much about our frailties, our strengths, and our courage as human beings,” she said. “The project is an opportunity to follow their lives beyond the point where they were recognized. For many of them, what happened after their time in the military was just as exciting for storying as what happened during service.”

This article was submitted to VAntage Point by the University of California, Riverside