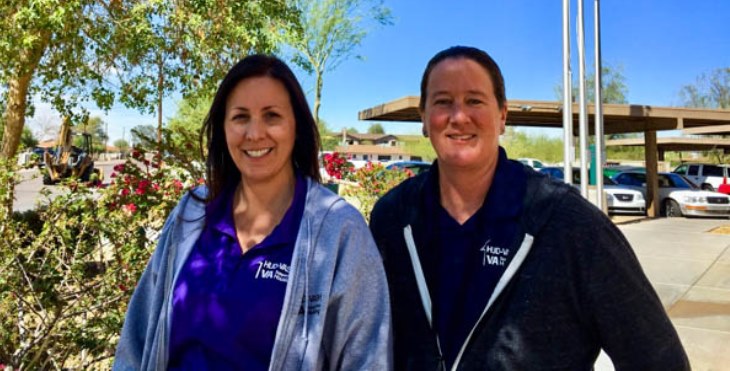 Tomorrow is a different day.

The motto used by a pair of Phoenix VA social workers to describe their relentless determination to help homeless Veterans was realized recently as they teamed up with nurses from the emergency department and community living center to help a Veteran in crisis.

For three days, employees throughout the Carl T. Hayden VA Medical Center approached a disabled Vietnam War Veteran, situated just outside the hospital and offered him assistance. However, the Veteran repeatedly declined help, until Anne Cook and Gina Sharp’s relentless persistence paid off.

“We saw him out there one day, but he disappeared,” Cook said. “So, we kept an eye out for him. Our thing as a program is tomorrow is a different day. We’re going to keep coming back to see Veterans. Today might be the day they accept help, and as social workers, that’s what we believe.”

Sharp said the Veteran had been seen multiple times by various members of the Phoenix VA staff, but left before he was able to receive the help he needed adding the staff was never deterred and gladly provided the Veteran aid.

“You never know when they’re going to accept your help,” Sharp said. “A lot of employees offered him help. We were maybe team number 15. We got lucky on that day.”

Cook said they knew they had the support of their work section to help the Veteran even though it was outside their work duty. She said every Phoenix VA employee who helped that day stayed past their shift and worked outside their normal duty to help.

“We didn’t have any question that if we went to help this guy that we would get the full support of leadership,” Cook said. “When we brought him in it was a smooth transition.”

Deborah Dominick, chief of social work, said the team’s outstanding work showed the employees lived the VA mission and values by providing the Veteran with the care and compassion that every Veteran deserves.