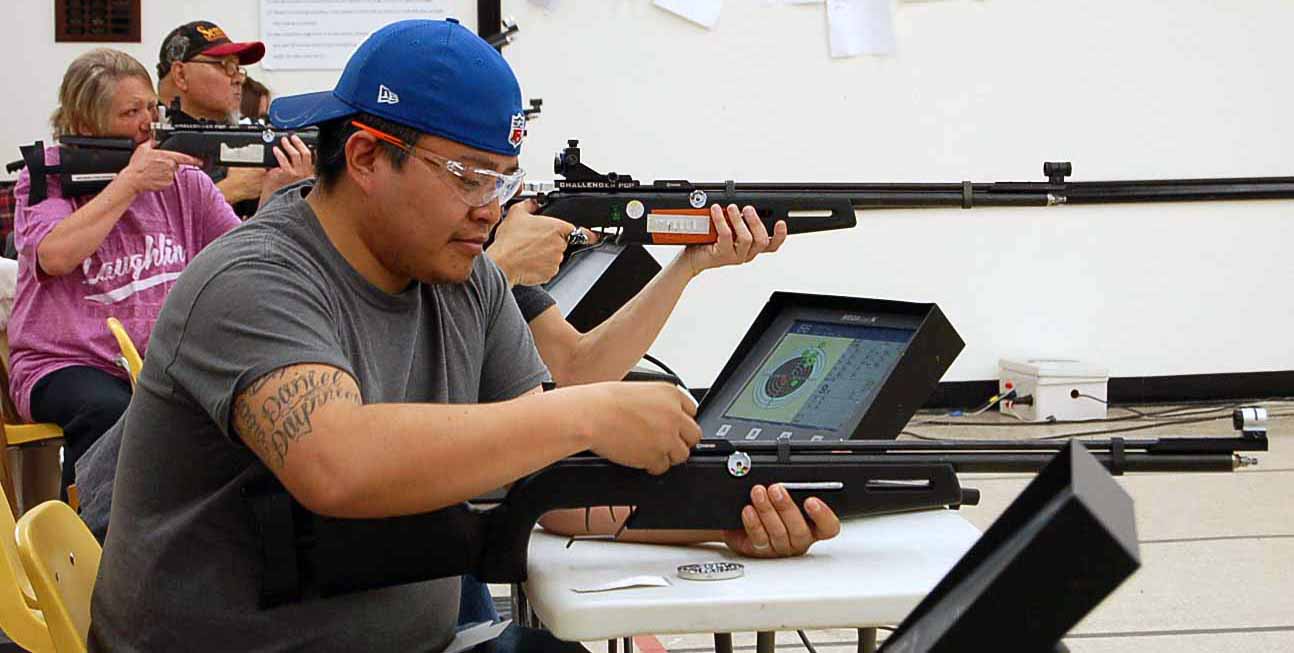 Colin Watson took aim, slowly exhaled and squeezed the trigger on his rifle. A split second later, the Army Veteran heard the “plink” of metal on metal as his lead pellet struck the stationary target 10 meters in front of him. Watson was one of six New Mexico Veterans who recently trained with air rifles at Albuquerque’s Eldorado High School.

“When I was in the Army, I always shot ‘expert’ and in basic training,” Watson said. “I was able to shoot 40 out of 40. I haven’t done any marksmanship in a while, so I’m really excited about getting into it again.”

The training event was coordinated by Catherine “Cat” Ivie, a recreation therapist for the New Mexico VA Health Care System. Ivie is training teams of Veterans for several sports as they prepare for the 2018 National Veterans Golden Age Games. For this training, she coordinated her efforts with Major Jim Koerber at Eldorado High School.

“We do not pay anything to use his space and equipment,” Ivie said. “It is a wonderful partnership.”

As Koerber slowly walked behind the line of shooters, he searched for those having problems with their rifles or targets. Typical issues that came up involved questions about how to read the electronic target monitors, or how to recharge a rifle that required more air pressure in order to shoot.

“They triangulate by sound,” Koerber said, pointing to the small, backlit monitor that displays a traditional target of black circles around a bull’s eye. Bright green and red dots mark the shots. “So, once the pellet goes through and rips the paper, it triangulates where that shot hit and gives them instant feedback on their monitor.”

Koerber said he enjoys training fellow Veterans, showing them the proper way to safely and accurately operate the air rifles.

“I like the competition and the patience,” Buck said. “They have a lot of patience with teaching us. I’m usually off the wall. If it wasn’t for the calm environment, I’d never come around.”

Five tables to the right of Buck, Gretchen Rieck gently placed her single-shot air rifle onto her shooter’s table. Rieck had to be pleased with her shooting skills, as the electronic monitor next to her table showed a shot group that was clustered in and around the bull’s-eye.

“There’s no kick, it’s not loud and I understand the appeal,” Rieck said. “The range is easy to set up, the ammo is cheap and it’s fun.”

An Army Veteran, Rieck also is a returning athlete for the 32nd annual event that will occur Aug. 3-8 in Albuquerque. She was part of the New Mexico team that competed in Biloxi, Mississippi at last year’s Games.

“Meeting other women Veterans from all over the country should be fun,” she said. “I hope I run into some of the friends that I made last year in Biloxi.”

About the author: Bill Armstrong is a public affairs specialist with the New Mexico VA Health Care System. He has been working in that position for VA since 2005, and previously served as a writer and editor for New Mexico State University’s College of Agriculture & Home Economics.  Bill is an Army Veteran and served in combat in Iraq.