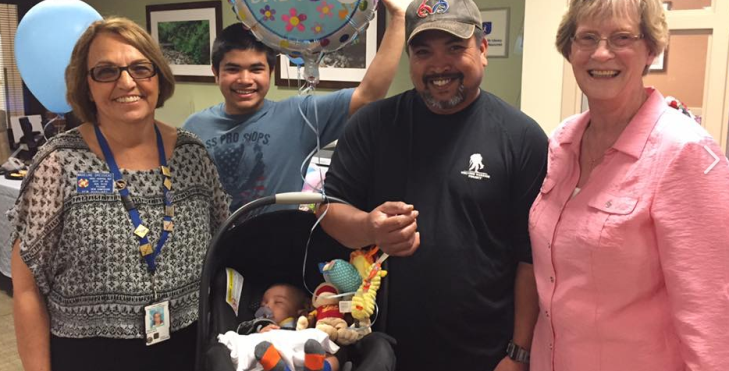 Nationally, VA partnered with Philips, First Quality Enterprises, the American Legion and the Elizabeth Dole Foundation to host 60 baby showers for 2,400 Veterans at VA medical center sites around the country.

“We actually went to support the VA; we weren’t expecting anything,” said Samey Mao.  “Laura, the Manchester VA women program manager, did so much for us when we first had Hunter back in January.”

The Maos were one of many families who attended the Manchester, Bedford and White River Junction VA Medical Centers inaugural event. Angela Mao and Samey Mao, are both Marine Corps Veterans having served from 1999-2007 as ammunition technicians. The couple met in 2000 at Camp Pendleton, California. Angela deployed to Iraq in 2003, and Samey deployed twice to Iraq and once to Afghanistan.

“It was surprising and a bit overwhelming when we got there; it was a ‘REAL’ baby shower,” said Angela.  “We went to meet new people and be engaged. We had a great time and it was good to see other first-time parents get what they needed.”

Angela and Samey shared time and their own parenting journey with couple expecting their first child.

“We told him that everything you learn is from experience, trial and error,” said Samey.  “Our boys each had different needs. One of ours was a Pampers baby, another Luvs and Huggies works for Hunter.  Take it slow, you’ll be fine.”

Philips provided more than three thousand bags with items needed for expecting parents.  And their employees donated their time and talent like the ultra sound transducer engineers who organized an assembly line to put together the bags for the Veteran families.

“They gladly took this on as one of their giving back activities.  Every bag was chock-full of needed items like Avent bottles transition cups, ‘Soothies’ and sippy cups,” said Peg Campbell, corporate social responsibility for Philips North America. “Philips is so proud to support these families who sacrificed some much for all of us.  We appreciate all they do, and it gives us great joy to participate in events like this.”

VA’s Nationwide Baby Shower is more than just a baby shower, it also plays a critical role in connecting Veterans with VA benefits, information and other resources they may need as they begin their journey into parenthood.

“As the wife of a Veteran and mother of two young children this is personal to me. I am passionate about ensuring the needs of Veterans are met,” said VA employee Laura Caisse, who is a licensed clinical social worker and a women’s program manager at the medical center.  “Expecting parents sharing service and stories was a terrific way of bringing our Veterans together and adding to the support systems they will surely need during this special time in their lives.”

About the author: Kristin Pressly is a public affairs officer with the Manchester VA Medical Center.