Texas VA reaches out to support victims of sexual assault 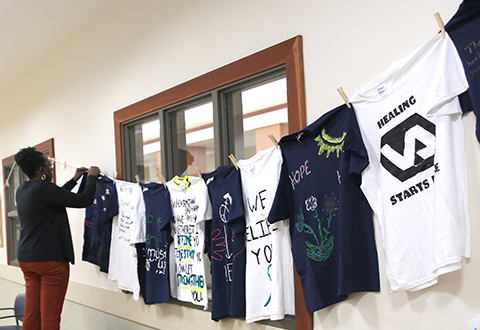 VA military sexual trauma coordinator Melica Wiley checks out a pair of denim jeans with the word survivor written in various languages from around the world on April 24, 2018. (U.S. Department of Veterans Affairs photo by Luis H. Loza Gutierrez)

“Sexual Assault Awareness Month aims to raise public awareness about sexual assault and abuse and educate individuals and communities on sexual violence prevention.  VA encourages a special focus on military sexual trauma, which is sexual assault or repeated, threatening sexual harassment experienced during military service,” said Melica Wiley, the military sexual trauma coordinator for VA Texas Valley Coastal Bend Health Care System. “[It’s] our opportunity to put VA’s military sexual trauma-related services in the spotlight, to highlight the important things being done locally and nationally to help our survivors recover, and to reach Veterans who may have previously felt like they had nowhere to turn for help.”

Throughout April, VA Texas Valley Coastal Bend Health Care System got the word out as you might expect — with displays, information tables and participating in local event.  However, the final event was more persona. The clothesline project is a program started in Cape Cod, Massachusetts in 1990 to address the issue of violence against women. Originally a way for women affected by violence to express their emotions by decorating and displaying a shirt, it has since been adopted to provide male and female victims an outlet for expression.

According to one of the clothesline project coordinators, Dr. Twana Cooks-Allen, 2018 marks the fourth straight year the clothes line has been displayed at the VA’s outpatient clinic in Harlingen, Texas.

Dr. Cooks-Allen, who works as a VA psychologist explained the jeans were added the clothesline in observance of Denim Day, which took place on April 25, and is an international event in which people are encouraged to wear denim jeans to raise awareness about rape and sexual assault.

Both Wiley and Cooks-Allen said they hoped that the addition of the denim jeans would create a greater impact among people visiting the clinic.

“I had the opportunity to see the clothesline and it’s an awesome display,” said Veteran Clarivel Garza. The former Army noncommissioned officer said reading the messages on clothing gave her the added motivation to tell others. I told fellow Veterans and coworkers to please take the time to read the messages written on these clothing items. They are truly powerful messages. Kudos to all who were involved in setting up this display.”

This year’s clothes line was on display until May 3.

“We decided to publicly display the clothesline into the first week of May because May is Mental Health Awareness month, and many experiences of sexual trauma and violence result in a person developing mental health issues in the future” said Wiley.

“Survivors don’t need to speak up publicly or even share their experiences of sexual trauma with others to live fulfilling, meaningful lives, but we want to convey that for those who want to speak up, in whatever way is right for them, VA is here to listen,” said Wiley. “We want all Veterans to know that they have the power to write the rest of their story. They decide where they go from here, and that the VA is here to help.”