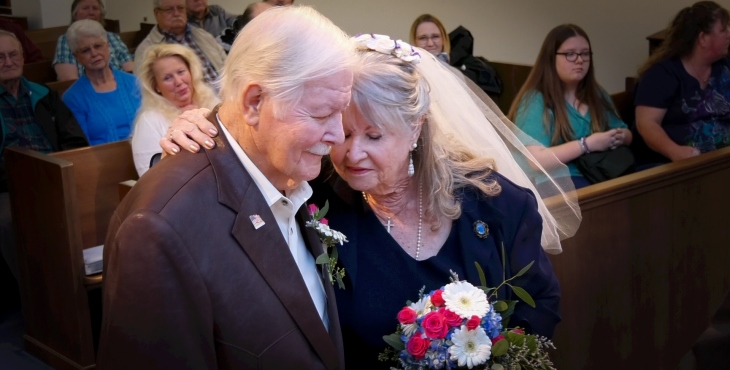 Veteran Paul Brown, 81, married Juanita Ratliff, 81, in front of a small gathering of friends and family in the medical center’s chapel. But this special ceremony was only one small piece of their story. It started in the 1960s, when Brown married his first wife, Reba Ellen, who was Ratliff’s sister.

In 2007, Reba Ellen, close to passing away, made her final request. She asked the two people she loved the most – her husband and her sister –  to promise to take care of each other. You see, Juanita’s husband, Carl, had passed away the year before, leaving her on the same path Brown was preparing to walk. Brown and Ratliff were both at her side when she made the request, and as Brown told it, “that kind of put us together.”

Ratliff has now been gracefully overseeing the care of her brother-in-law for more than a decade. What started as a promise quickly developed into a meaningful friendship and found its place in their history as an enduring love story. Their families seamlessly accepted and encouraged their relationship. Over the past six years they began to date and not long ago, began to attend church together. Upon Brown’s most recent admission to the VA medical center, he had an idea.

“Let’s get married,” he asked her, and an idea that may have seemed foreign years ago suddenly felt “as right as rain” to the both of them.

A team effort from the staff, paired with supportive family and friends, resulted in a beautiful ceremony to celebrate the love of a Veteran and his best friend. The James H. Quillen VAMC and community living center staff were honored to be a part of such a special day for two special people. The staff provided a cake and a reception for the family and friends who had gathered to celebrate the happy couple.

About the author: Kristen Schabert is a public affairs officer at the James H. Quillen VA Medical Center in Mountain Home, Tennessee.