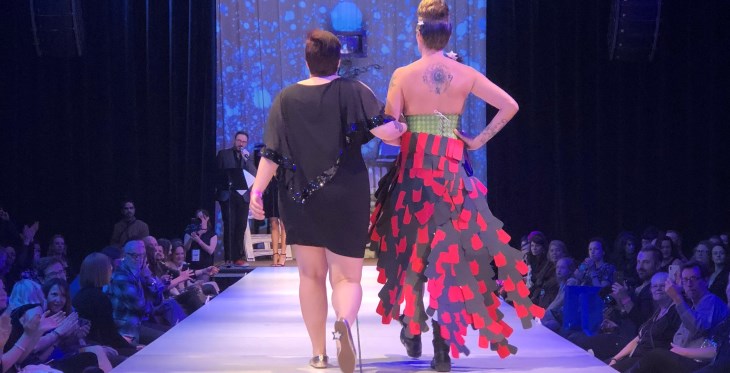 As the stage lights came up, models sailed down the runway wearing costumes straight from your wildest dreams—an Aztec princess, a dragon lady, an empress of China. Exquisite and fanciful designs in every color swayed down the runway, and every wonderous gown was made of no more than 32 sheets of paper.

In the middle of the pageantry came a lone soldier, marching down the runway wearing a dress riddled in statement and a pair of well-worn jungle boots. The dress was called “Soldier for Life,” and it was the only piece in the 14th Annual Paper Fashion Show to address Veteran suicide.

“Soldier for Life” was conceived by United States Army Veteran Tiffany Freeze, an Art Institute of Colorado student majoring in fashion design. Freeze designed and created the dress to both introduce herself to the fashion world and to make peace with her demons. The dress wasn’t just gorgeous, it was steeped in meaning.

“I wanted to show an all-around piece that really had a story,” Freeze said. “There was a reason for every single piece of it—it was all very intentional.”

Freeze explained the name of the dress, saying it represented all of her brothers- and sisters-in-arms, “You really are a soldier for life. Whether you get out or not, you are always a soldier,” she said.

Freeze chose Army Veteran and Denver VA employee Sarah Alder to wear “Soldier for Life” on the runway. Alder stood for nine grueling hours as the dress was applied to her body in small sections with glue, and at the waist, 550-cord. She brought her tall stature, spiky hair and combat boots to the show, saying, “Those were my favorite jungle boots. It was interesting putting those back on. In some ways I still wear them.”

It seems our past, especially our military service, never really leaves us.

Freeze dug deep into the raw emotion of her reality to design a dress that was beautiful, but also focused on the men and women in mental anguish who have taken their own lives along the way. The skirt was made of individually hand-cut dog tags, representing the soldiers we have lost; black dog tags for those lost in war and red for those lost to suicide.

“In the military, you do all these things, and when you get out, you have to deal with it all,” Freeze explained. “Unfortunately, a lot of people don’t deal with it well.”

The waist of the dress featured a corset belt made of painstakingly hand-folded paper in two shades of green, designed to resemble the old Army digital camouflage pattern.

“The corset gave that structure that I wanted to show, at the base of us. At the core of our lives, we have the structure of the military. Everyone that serves has that,” she said.

The dress was finished with a one-shoulder top made entirely of blue and white stars.

“We have stars on our flag—the blue and white is our country, and I thought it was like the patriotism that we have in ourselves as service members, as well as that of the ones we protect here at home,” Freeze elaborated. “I wanted to show that we really care about our country, and that’s why we joined.”

Alder added, “In some ways the dress was kind of a heavy thing to wear, because I knew what it meant. Just thinking about the suicide rates that we have, I can’t imagine adding 20-22 dog tags every day to that dress. You carry the weight of your service members with you, because you’re in it with them. You have that permanent connection. Doesn’t matter what service, what generation. You carry the weight of every single person behind you, but you lean forward with the structure and the patriotism you have.

“Our dress had a story, it wasn’t simply pretty, it wasn’t flashy. But that’s the thing about military service—it’s not pretty, it’s not flashy. You don’t do it for the money, you do it because of the patriotism you have for your country.”

Freeze says the experience has been therapeutic for her. “I met Sarah during a crisis in my life. I was on the verge of suicide, and she helped me through it. Creating this dress has been kind of a therapy for me. I put everything I feel from my service, and things that happened. I was able to put it into this and be like, I’m done with it, I need to put it behind me and put it to good use instead of letting it fester and eat at me. Doing this helped me cope with what was going on inside. That is my entire life, there on the runway, and it’s the life of many of us.”

“Soldier for Life” was purchased at the auction following the Paper Fashion Show and will be donated to and put on display at the new Rocky Mountain Regional VA Medical Center in Aurora, Colorado, as a reminder to all Veterans that we stand together, no one is forgotten, and that in the end, we as a family of Veterans are here for you.

Freeze hopes other Veterans will see the dress on display and it will help them through hard times. “Just don’t give up, just ask for help. That’s what I did, I asked for help and I got what I needed.”

Jamie Dannen is a Public Affairs Specialist at VA Eastern Colorado Health Care System in Denver. She is an Army Veteran and a graduate of Kansas State University.